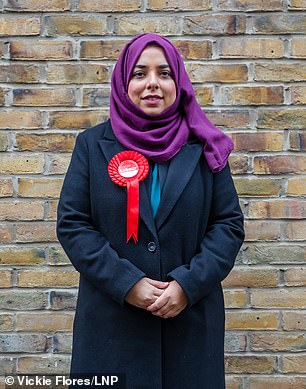 A Labour MP accused of defrauding her council to obtain social housing had held four roles at the body managing accommodation for the local authority she allegedly defrauded.

Apsana Begum, 31, claimed she was living in ‘overcrowded conditions’ with her family when she was in fact in a four-bedroomed house with three other people, the court was told.

She claimed another allegedly fraudulent council house application had been made in her name by her partner – without her knowing.

The MP won the east London seat of Poplar and Limehouse with a 28,904 majority in the general election in December 2019.

Apsana Begum (pictured left), the MP for Poplar and Limehouse in east London, claimed she was living in ‘overcrowded conditions’ with her family when she was in a four bedroomed house with three other people, jurors were told. Snaresbrook Crown Court heard the 31-year-old had held four different roles with the organisation that provided social housing services

‘I was the lead investigator,’ he said.

‘I made requests to the payroll and pension services for any history regarding the defendant.

‘My inquiry with payroll advised me of the number of posts she held within Tower Hamlets Homes.

‘I believe she had four posts within Tower Hamlets Homes.

‘It is a different organisation to Tower Hamlets Housing Options.’

Jurors heard that the role of the housing advisor, occupied by Begum between 2013 and 2014, was to ‘provide professional and responsive customer services as the first point of contact for residents contacting Tower Hamlets Homes.’

In her application for the role, Begum wrote: ‘I have considerable experience of handling housing complaints in my previous role as an executive support officer in the Mayor’s office.’

Begum later applied for a role as a personal assistant to the service head of Tower Hamlets Housing Options.

In her application, she wrote: ‘I am also well aware of the demand for affordable social housing to tackle overcrowding in Tower Hamlets as an inner London borough.’

Mr Messouri also searched through Begum’s work email account to look for evidence of her knowledge of social housing protocol and of her informing Tower Hamlets Housing Options of her change of circumstances.

He searched for a number of terms including ‘overcrowding’, ‘bidding’ and ‘lettings’ across two periods corresponding with Begum’s alleged failure to notify Tower Hamlets Housing Options of her change of circumstances.

Mr Messouri told jurors he chose these terms to identify Begum’s ‘knowledge of the system’ and whether there had been any ‘contact with the service’ to notify them of her change in circumstances.

Prosecutor James Marsland asked Mr Messouri: ‘Was there anything about Ms Begum notifying Housing Options of a change of circumstances?’

‘I found no knowledge in any of the emails I read,’ said Mr Messouri.

One email forwarded by Begum detailed a resident’s issues with overcrowding.

Jurors were shown that the subject of one email was ‘close overcrowding’ and reads ‘I am currently in band three, and inadequately housed when I should be in band two.’

The court heard allegations of housing fraud against Labour MP Apsana Begum were first made by her ex-husband’s brother-in-law.

Begum had ended her marriage to Ehtasham Haque, a Tower Hamlets councillor in October 2015, when she found out he had cheated on her, the court has heard.

Cross-examining Mr Messouri, barrister Helen Law, for Begum, said: ‘The defence case, as you know, is that Ms Begum didn’t bid when she was living at St Bernard House.

‘The only other candidate she could think of that may have bid using her account is Mr Haque.’

Jurors were told Mr Haque suggested Begum had moved in with him on 1 November 2013, in correspondence with the Tower Hamlets’ council tax department.

But according to other records held by the council, Begum first moved in with Mr Haque in June 2013.

Ms Law asked Mr Messouri whether he was ‘aware that [the man] who made the complaint is Mr Haque’s brother in law?’

Mr Messouri replied: ‘The only difference that would have made to my information, I would have noted the complaint was from a partner to the case that was being investigated.’

Ms Law said: ‘We know that by the time this complaint was made, Mr Haque was a serving London borough of Tower Hamlets councillor.

‘At the time this allegation was made, in 2019, Mr Haque was on the audit committee of the council.

‘He’s now on the housing and regeneration sub-committee.

‘If you had noticed this possible connection.

‘Her ex-partner, who she says may be responsible for a key part of the prosecution case – the bids at St Bernard House – when he is a serving councillor on the committee that oversees your department.

‘You might have thought Mr Messouri, that somebody else should have taken over this investigation.’