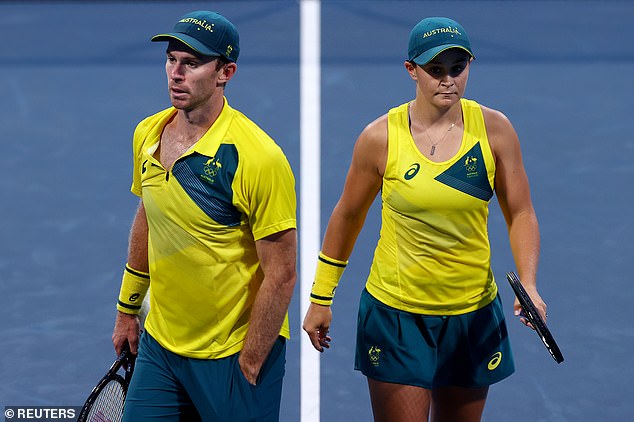 Barty and Peers must settle for a bronze-medal playoff after falling 5-7 6-4 13-11 to Andrey Rublev and Anastasia Pavlyuchenkova after letting a match point slip against the Russians in a tension-filled deciding super tiebreak.

Peers and the newly-crowned Wimbledon champion had been a point away from the chance to join doubles greats legends Mark Woodforde and Todd Woodbridge as Australian tennis’ only Games gold medallists.

Ash Barty and John Peers (pictured) have lost their semi-final to play for Olympic gold, going down to ROC pairing Andrey Rublev and Anastasia Pavlyuchenkova

Alas, Barty and Peers must instead return on Saturday to fight for a bronze after Rublev, the men’s world No.7, and Pavlyuchenkova, the women’s 2021 French Open finalist, held their nerve to clinch a gallant comeback win on their third match point.

After a shock first-round exit as top seed in the singles, then a tight third-round loss in women’s doubles with Storm Sanders, Barty seemed poised to make the mixed final after taking the opening set on Friday night.

But, after overcoming the concession of the second set to establish a 6-4 advantage in the super tiebreak, Barty and Peers were unable to close out the thriller.

The duos played out an incredibly tight match as the ROC pairing come out on top after a tie break loss, going down 13-11 to lose the match

They eventually succumbed when Rublev rifled an unplayable return of serve from Peers into Barty’s body at the net.

Bidding to claim Australia’s first Olympic tennis medal since Alicia Molik won bronze in the women’s singles in Athens 17 years ago, Barty and Peers could face all-conquering men’s world No.1 Novak Djokovic in the battle for third place and a coveted spot on the podium.