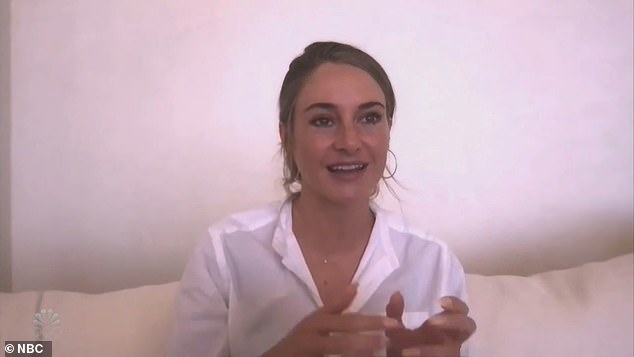 Shailene Woodley, 29, says she felt insecure when she was younger: ‘Comparison was really detrimental to my mental health’

Shailene Woodley went through a couple of years ‘feeling insecure.’

The Divergent actress, 29,  admitted there was a time when she struggled with comparing herself to others, and says it had a really detrimental effect on her mental health.

‘I was so strong-headed and free-willed, so rooted in the core of who I was,’ said the actress who started her career in 2001 on The District when she was just a child.

Self image: The Divergent actress admitted there was a time when she struggled with comparing herself to others, and says it had a really detrimental effect on her mental health. Seen in 2008

‘But in my mid-20s I went through a couple of years feeling insecure about the choices I was making, believing the opinions of others a little bit too much, not staying on my path,’ added the beauty.

‘I had a couple of years where comparison was really detrimental to my mental health.’

Shailene was branded a hippy in the past for speaking out about environmental issues and while she used to be ‘offended’ by the title, she’s proud of it now.

She added: ‘I mean, I used to get offended by that. But now I’m just like, ‘Great, you want to call me a hippy? So many things about the hippy movement were f***ing beautiful, I’m all about it.”

The 29-year-old actress doesn’t mind being called the term if people are ‘going to learn some things.’

She told The Observer: ‘When I was talking about these things 10 or 15 years ago, it was before people knew what environmentalism was. The most environmental thing you could do then was recycle.

He played her father: George Clooney (L) and Woodley attend The Descendants premiere during the 55th BFI London Film Festival at Odeon Leicester Square in 2011; here she was 19

Older: At age 20. Here she is seen at the 18th Annual Screen Actors Guild Awards

‘There wasn’t a lot of narrative around these things. So of course you’re going to be ostracized in some way, be labelled as ‘other,’ because it’s not mainstream. Now? Every single f****** influencer or model or CEO is talking about this! Look, I don’t take offense at being called ‘The Hippy of Hollywood’ if it means one or two people are going to learn some things.’

Shailene stars in Netflix’s The Last Letter from Your Lover,’which is now streaming. The Big Little Lies star is set to film Showtime drama Three Women later this year.

And she confirmed her engagement to football star Aaron Rodgers in February.

It’s love: And she confirmed her engagement to football star Aaron Rodgers in February