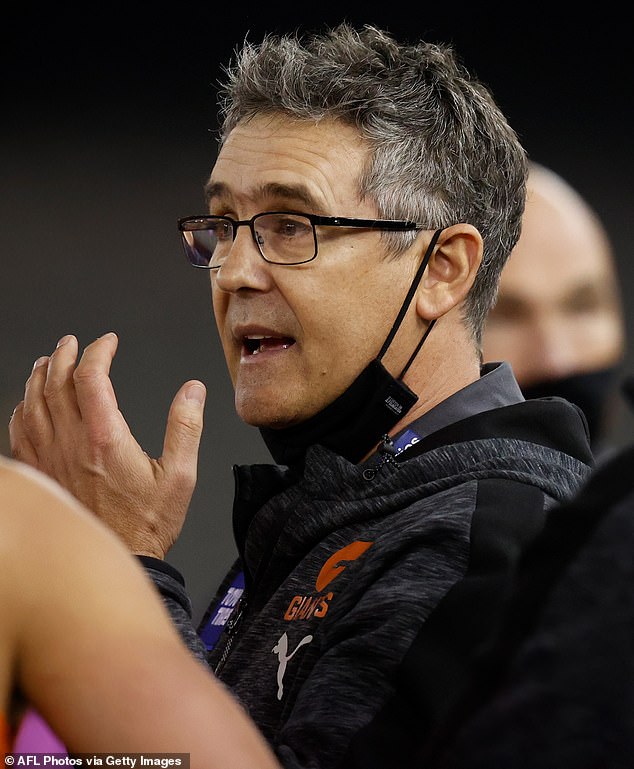 Travel-weary GWS up for Cat fight in AFL

GWS coach Leon Cameron has no qualms about his side being asked to back up against Geelong on a five-day break as the AFL faces another fixture shake-up.

Queensland’s snap lockdown wreaked havoc on the schedule last weekend and hastily rearranged matches will have a flow-on effect in round 21.

Essendon, who lost to Sydney in a rescheduled match on Sunday, have already had their one allotted five-day break this season, meaning their clash with the Western Bulldogs will likely be pushed back from the Friday night slot it had been set down for.

The Cats-Giants match at GMHBA Stadium appears set to be brought forward to that Friday night, with the AFL set to confirm the new fixture for round 21 as soon as Monday.

GWS are yet to have played on a five-day break this season.

“Whether it’s Friday night or Saturday, our boys will be ready,” Cameron said after Sunday night’s 27-point defeat to Port Adelaide.

“Clearly it’s another really tough game, I mean, Port sit in the top four and Geelong are in the top two, so it’s great exposure for our young group.

“There’s no bigger challenge than Geelong in Geelong, whenever that may be.”

GWS have been on the road since they and Sydney fled the harbour city in June, playing six straight matches interstate.

Both NSW clubs were in Queensland on Saturday when the state’s lockdown was announced and made a mad dash to Melbourne for their hastily rearranged Sunday matches.

Cameron dismissed fears over mental fatigue setting in for his players and staff, saying all clubs go through it during a long season regardless of whether they’re travelling for extended periods.

The Giants are also battling a growing injury list, with Phil Davis and Jacob Hopper ruled out of the Geelong game because of concussion, Sam Reid and Daniel Lloyd battling fresh ankle concerns, veteran ruckman Shane Mumford unlikely to get up on a short break and captain Stephen Coniglio (toe) no certainty to be fit.

“It is what it is, we’re lucky to be playing,” Cameron said.

“Our challenge is to make sure we recover and look forward to that Cats game.

“It’s going to be a huge challenge and a lot of people won’t give us any chance because of our injury list and what’s happened over the last seven or eight weeks, but we roll out every game and we want to win every game.”

Port Adelaide have been based in Melbourne for almost three weeks but will head home to South Australia on Monday to prepare for a Showdown with the Crows as they look to cement a top-four spot.

Brisbane and Melbourne face quarantine stints in Western Australia under state government rules ahead of their respective clashes with Fremantle and West Coast at Optus Stadium.

Hawthorn are set to host Collingwood in Launceston, while the Carlton-Gold Coast, Richmond-North Melbourne and St Kilda-Sydney clashes are all scheduled to be played in Melbourne.

There will be no crowds in Victoria again in round 21, but there is hope they will return in a limited capacity the following week.