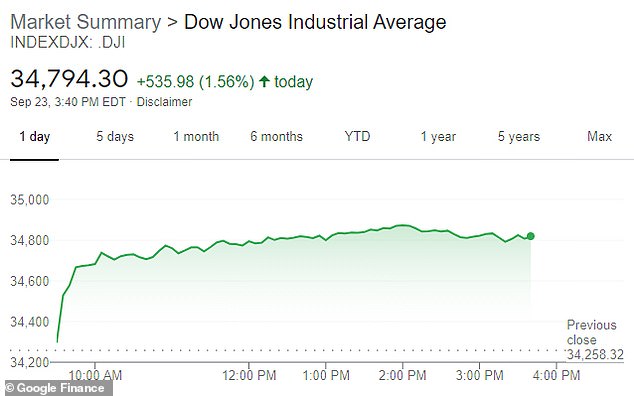 US stocks spiked for a second day in a row with the Dow gaining nearly 600 points after opening as fears abated over Chinese property developer Evergrande’s ability  to pay $83.5 million worth of interest on Thursday.

The two-day market rally also comes on the heels of the Federal Reserve’s decision on Wednesday to keep current monetary stimulus in place for the time being.

The Dow Jones Industrial Average gained just over 582 points, or 1.7 percent, throughout the day on Thursday before closing with a gain of 506.50 points, while the S&P 500 rose 1.5 percent and the Nasdaq Composite 1.1 percent.

Thursday’s rally added to a 338-point gain made in the Wednesday’s session.

The gains accrued over the last two trading days have pushed the major averages out of the red and into the green for the week, according to CNBC, with the Dow and S&P now up 0.7 percent and 0.6 percent, respectively, and the Nasdaq Composite has moved up 0.2 percent for the week.

The beginning of the trading week did not begin with such a hot start, however.

The Dow Jones Industrial Average gained just over 582 points, or 1.7 percent, after opening at 535 points on Thursday

The Nasdaq Composite gained nearly 175 points, or 1.2 percent on Thursday

On Monday, the Dow dropped over 600 points and dropped yet again on Tuesday amid concerns over the possible collapse of Chinese property developer Evergrande, which caused a negative, cascading effect throughout the global economy earlier this week.

But then Hong Kong’s Hang Seng index rallied over one percent overnight as Evergrande itself rebounded more than 17 percent after investors worldwide hedged their bets on China coming to the embattled company’s rescue by way of providing more liquidity for the market, the outlet reports.

On Wednesday afternoon, the US market received an additional boost from the Fed following the central bank’s announcement that it would not immediately remove any stimulus policies.

The Chairman of the Federal Reserve, Jerome Powell, had issued a statement yesterday noting a ‘moderation in the pace of asset purchases may soon be warranted’ should progress continue ‘as expected.’

The gains accrued over the last two trading days have pushed the major averages out of the red and into the green for the week, with the Dow now up 0.7 percent from Sept. 20-23

‘Uncertainty had been building around the path of the economy and the Fed instilled some confidence into markets yesterday,’ said Charlie Ripley, senior investment strategist for Allianz Investment Management.

‘In addition, other risks that have been weighing on investor sentiment like the debt ceiling and risks associated to China’s real estate market appear to be fading, which have dialed up investor’s appetite for risk.’

By Wednesday morning, the Chinese property developer had assuaged global investors’ concerns by resolving a payment on a local bond, according to CNBC.

However, those same investors are still waiting to see if the Evergrande Group will make good on an $83 million interest payment on a US dollar-denominated bond which is due Thursday.

Some bondholders were not confident in a Thursday payment, saying they had not yet heard from the company on the matter, according to Reuters

While Bloomberg News reported that government regulators have since instructed the real estate giant in an effort to avoid a near-term dollar bond default, some bondholders were not confident in a Thursday payment, saying they had not yet heard from the company on the matter, according to Reuters.

Thursday’s second-day rally suggests that investors traded despite those fears, and in spite of the fact that weekly unemployment claims rose more than expected last week, CNBC reports.

‘Although there may be some additional turbulence this fall, we are constructive on the U.S. economy in general and believe that any dips would be worth buying as the fundamentals are still sound and recession appears to be more than a year away at this point,’ said Chris Zaccarelli, chief investment officer for Independent Advisor Alliance.

Following Thursday’s rally, the S&P 500 is down just 1.4 percent for the month of  September.