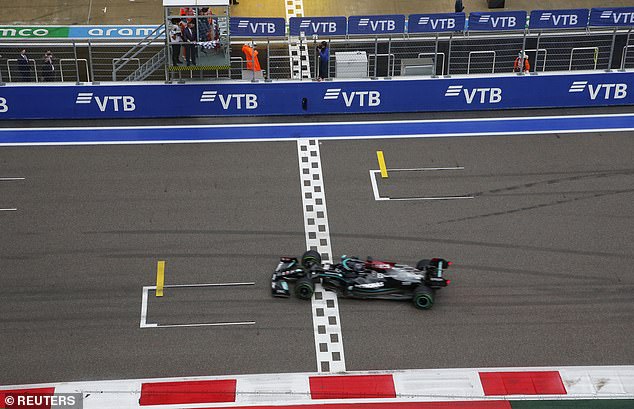 By Jonathan Mcevoy For Mailonine

It had looked likely that Norris would become the youngest ever British F1 winner until rain fell and he opted to remain on dry tyres. The conditions worsened and he slipped off track, letting Hamilton go past.

Hamilton started fourth and fell back to seventh on the opening lap but bided his time.

He may have passed Norris at the close anyway but a mistake by McLaren and inexperience from Norris presented him with the win, a landmark century that may never be beaten.

Had conditions not deteriorated, Norris was in with a strong chance, holding Hamilton at arm’s length for the last third of the race.

But he finished seventh. What a fall. What despondency. What a bitter pill.

Hamilton won easily in the end with Max Verstappen, who started last, taking a remarkable second place, 53 seconds back. That means Hamilton leads the drivers’ standings by two points with seven races remaining.

Norris, from Glastonbury, started on pole but had to pass Carlos Sainz of Ferrari on lap 13 after being hunted down at the start. He was then in control until the final twist, driving with fluency. Sainz finished third.

Hamilton said: ‘It was hard work man. It has taken time for the 100th win. Fantastic call on the tyres. Thank you.’

Follow play-by-play Formula One coverage of the Russian Grand Prix from Sportsmail‘s MAX MATHEWS below, with all the updates from a dramatic race.