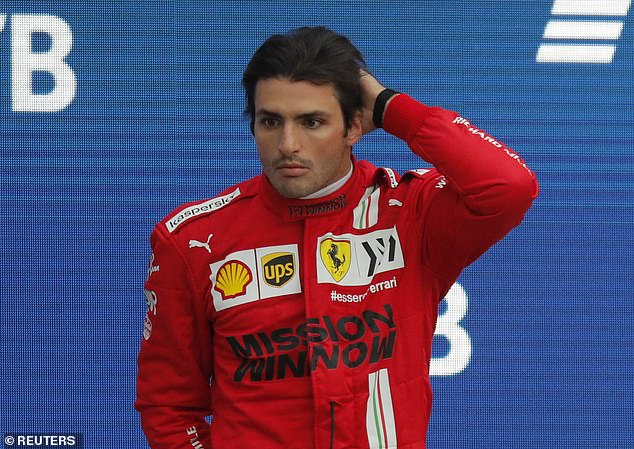 
Ferrari’s Carlos Sainz will start from the back of the grid in this weekend’s Turkish Grand Prix as a result of penalties for exceeding his engine allocation, the Italian team said on Wednesday.

In F1, drivers are allowed to use three different engines over the course of the season, and incur sanctions if they go beyond that.

Ferrari team-mate Charles Leclerc started at the back for the previous race in Russia for the same reason. Spaniard Sainz started on the front row and finished third in Sochi.

‘As was the case for Charles Leclerc in Russia, in Turkey Carlos Sainz will take a completely new power unit fitted with the new hybrid system,’ Ferrari said.

‘Therefore he will start from the back of the grid with the aim of climbing up the order to try and score some points.’

Sainz could be joined on the back row by seven-time world champion Lewis Hamilton, who could also have his engine changed for this weekend’s race.

Hamilton has already used his full allocation but Mercedes have not yet confirmed whether or not they will replace it this week.

Last time out, Verstappen used his fourth engine in the build-up to the race in Russia but managed to fight from the back to finish second, keeping Hamilton’s advantage to a minimum.

And now Mercedes boss Toto Wolff has admitted that Hamilton could now take the same option this weekend, putting the Brit in a similar position to Verstappen just a fortnight ago.

Speaking ahead of the Turkish race this weekend, Wolff said of the power unit change: ‘It’s a possibility. When, and how, is not yet decided. Most important is that you don’t DNF because of a reliability issue.

‘You can cope with swings, whether you finish second, third, I think that is OK, the championship is going to go long. But if you don’t finish…

‘So we are looking at the parameters of the engines, making sure we don’t suffer from any reliability problems.’

Ferrari said also that team boss Mattia Binotto would not be attending the race but would remain at the Maranello factory to focus on the development of next year’s car.

‘He will of course follow all sessions and the race from the Remote Garage, with a permanent link to the team at Istanbul Park,’ the team added.

There are seven races left of the 2021 season, with Turkey, the United States, Mexico, Brazil, Qatar, Saudi Arabia and Abu Dhabi still to come.