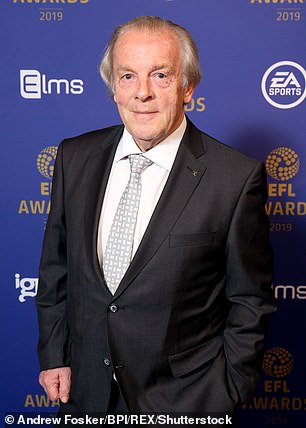 New chief executive Maheta Molango has declined the chance to become a trustee of the PFA’s charity arm, leaving Gordon Taylor’s acolytes in charge of the organisation and numerous ex-players struggling to access funding desperately needed to help them cope with dementia.

Sportsmail has learned that following his decision to step away from the charity Molango has no control of the £62million it holds in cash reserves, making him powerless to help the dozens of ex-players suffering from dementia, including two families who were recently denied a request for £100,000.

The PFA chief executive is automatically entitled to become a trustee of the PFA charity, but Molango has opted not to do so at present due to concerns about a potential conflict of interest.

Maheta Molango (R) has declined the chance to become a trustee of the PFA’s charity arm, leaving Gordon Taylor’s acolytes in charge of the organisation

Molango is understood to be standing down from the Board, leaving the organisation in the hands of chairman Brendan Batson (left)

The Charity Commission launched an inquiry into the PFA Charity three years ago, with a lack of separation between the union and the charity one of its main concerns, and Molango has chosen to step away until such governance issues are resolved.

In contrast Taylor was one of the charity’s eight trustees until finally stepping down after 41 years in charge of the union earlier this year.

The previous regime at the PFA run by Taylor have repeatedly resisted demands by this newspaper and others to set up proper funding and research programmes to help deal with football’s dementia crisis, while to compound matters Sportsmail has also been told that the PFA charity do not have a written policy for allocating funding.

Molango is eager to improve the union’s support for dementia sufferers and recently met with the founders of charity Head for Change Judith Gates and John Stiles, son of World Cup winner Nobby who sadly passed away last year.

The son of Nobby Stiles (above) who sadly passed away last year, was told the PFA lack the financial capacity to address the issue

At the meeting Molango is understood to have told them that while the PFA have an ‘absolute commitment’ to addressing the issue of dementia currently lack the financial capacity to do so, with the charity holding the vast majority of their assets.

Gates and Stiles then spoke to Batson to demand immediate assistance to the tune of £100,000 the families of two ex-players suffering from dementia and in desperate need for support. They were told that the PFA was considering a request from one family and had asked for more information.

Gates and Stiles also asked what the PFA Charity’s criteria for providing long-term support to sufferers was but, from his response, say they were given to understand that there was no written policy.

Batson was appointed in 2013. It remains to be seen if Molango is keeping clear of the union’s charity arm until the Commission delivers what many believe will be an incredibly damaging report, while the former Brighton and Oldham striker is also busy dealing with a raft of issues involving current players including the vaccination row.

‘It’s ludicrous,’ he said. ‘If you’re the new CEO of a company you don’t take power away from yourself, whether it’s short-term or not.

‘The situation we have now is that acolytes of Taylor’s – the people who sat at the side of him like nodding dogs while he turned his back on those in need – are in control.

‘The lunatics are in charge of the asylum. That can’t be right. We thought the new chief exec was going to go in and shake things up but he’s actually stepped aside. Taylor’s cronies were complicit in the decision making over decades that has harmed hundreds and now they’re in control?’

Sutton, who has campaigned tirelessly for immediate action, added that he was ‘staggered’ by the existing set-up.

‘Families need help now,’ he said. ‘There’s £61.9m in the bank and they can’t help them? It’s staggering. Chief execs don’t go in and give up power.

‘The bottom line is these families need help now and they’re not getting it. The money is there. The guy who goes in to make change and who makes promises is now saying he is helpless – it’s pathetic.’

Sutton also blasted the apparent lack of a criteria to help those in need. ‘That there is still no criteria is unreal,’ he added.

‘They help some and they don’t help others, just as it’s always been. The two families who they were asked about – what criteria do they need? They are suffering badly with dementia – what more does the PFA need to know?’