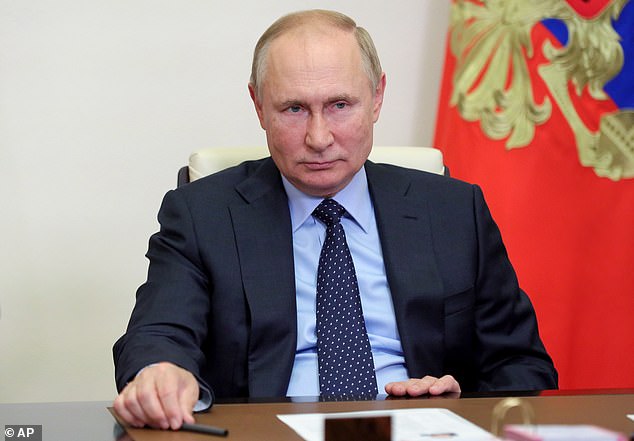 By Will Stewart and Lauren Lewis For Mailonline


Russia has announced plans to set up a new Arctic naval fleet in a major military expansion as President Vladimir Putin today marked his 69th birthday.

The new fleet will help Russia tighten its stranglehold on Europe’s gas supplies by securing future energy reserves in the polar region and giving Russia full control of the so-called Northern Sea Route for commercial shipping.

It comes after Putin was accused of deliberately withholding gas supplies and turning energy ‘into a weapon’ as leverage with the EU.

He wants the bloc to sign off on his new Nord Stream 2 gas pipeline, run by state energy company Gazprom, that bypasses Ukraine – and has hinted he will pump more gas into Europe if the EU approves the controversial plan.

The veiled threats have sent gas prices soaring across the continent as the cold winter approaches and added fuel to claims Moscow is deliberately withholding supplies.

Details of the new Arctic naval fleet emerged in the early hours of Putin’s 69th birthday after a naval source told state news agency TASS the ‘new structure’ was ‘under consideration’.

‘It will be a separate formation within the Navy, and its responsibility will be to ensure the safety of the Northern Sea Route and the Arctic coast,’ the source said.

Currently this is the responsibility of the Northern and Pacific fleets, but under the blueprint they will be freed for ‘combat missions’ while specially designed Arctic vessels will patrol the polar region.

The announcement came after Putin made several remarks about energy supplies to Europe, saying shipping greater volumes of gas through Ukraine was ‘economically unprofitable for Gazprom – because it is more expensive.’

He also pointed out new pipeline systems ‘reduce the amount of CO2 emissions into the atmosphere by 5.6 times’ and that European leaders should admit their mistakes in switching to short term gas contracts.

‘Today it has become absolutely obvious that this policy is erroneous,’ Putin said.

‘As a result, now the gas price has broken all historical records and today it’s already striving to $2,000 dollars per 1,000 cubic meters.’

A Russian navy submarine – part of one of four of the country’s fleets with the the Northern, Pacific, Baltic, and Black Sea fleets as well as the Caspian flotilla

But prices reversed course hours later, sending the UK contracts back to £2.87, after Putin sought to stabilise the gas market by saying that state-backed monopoly exporter Gazprom could increase supplies to Europe.

Critics accused the Russian strongman of trying to stave off allegations that Moscow is trying to ‘weaponise’ gas supplies.

In response Jennifer Granholm, the US secretary of energy, said the US is watching Russia ‘carefully’, adding: You don’t want to see energy made into a weapon’.

Meanwhile the new fleet has been dubbed a ‘birthday present’ for Putin more than 20 years after he came to the Kremlin presidency at 47.

‘The plan is that the infrastructure of the new association will be separate from the Northern and Pacific fleets,’ said the source.

‘In the future, it will have ships and special equipment suitable for the Arctic.’

Russia currently has four fleets – the Northern, Pacific, Baltic, and Black Sea fleets as well as the Caspian flotilla – but the proposal would see a fifth fleet added to the country’s navy.

The Northern Fleet is based in the Russian Arctic with a history dating back to 1833 but has a wider role in – for example – sending nuclear submarines into the Atlantic.