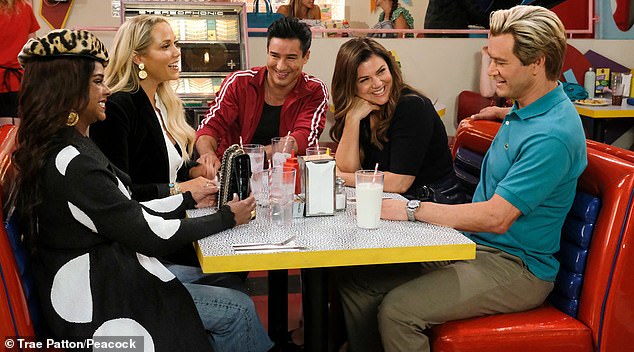 The Saved By The Bell reboot series has another season coming out this fall, and streaming service Peacock released the first trailer for it on Wednesday.

One of the images from the new season sees the original cast members from the hit sitcom.

They are back: The Saved by the Bell series reboot has another season coming out soon, and streaming service Peacock released the first trailer for it on Wednesday. One of the first photos from the new season sees the original cast members from the hit sitcom

Back in the day: The first series aired from 1989 until 1993. Seen here is the late Dustin Diamond with Mark-Paul Gosselaar, Mario Lopez and Tiffani Thiessen, among others

The series’ sophomore outing is set for release on November 24, and it will again follow the adventures of Daisy Jiménez, played by Haskiri Velazquez, and Aisha Garcia, played by Alycia Pascual-Peña, after they transfer to Bayside High School.

The trailer begins with a recap of season 1 as it shows Daisy and Aisha arriving at Bayside High and experiencing the affluence and privilege of the students firsthand.

It then cycles through a number of the main characters including Mac Morris, son of Zack Morris from the original series, Lexi Haddad-DeFabrizio, a transgender teenager on the cheer squad and Principal Ronald Toddman.

Revival: Mario Lopez will once again take up the role as A.C. Slater. After graduation he becomes the football coach, where he remains for the next fifteen years (pictured in 1990)

She is back: Elizabeth Berkley as Jessica Spano; she plays a school counselor (right in 1989)

The trailer then transitions to reveal more about the upcoming season of the show including Principal Toddman, played by John Michael Higgins, announcing that Bayside will host the Southern California School Spirit Competition.

As one character jokingly put it in the trailer, ‘The stakes have never been higher.’

A montage of moments from the upcoming season follows, including one where it appears Aisha kisses her classmate Devante Young, played by Dexter Darden.

In another, Mac Morris, played by Mitchell Hoog, twirls Daisy into a deep dip in front of a set of lockers.

How low can you go? Belmost Cameli who plays Jaime Spano in the series looks excited during his a limbo contest

Another season on the way: The second season of the Saved by the Bell reboot is set for release on November 24

Getting closer to Daisy: Mac Morris, played by Mitchell Hoog, twirls and dips Daisy in the school halls during the trailer

Many characters dance in the trailer including Lopez who shows off his moves while on crossing guard duty.

The series’ first season received rave reviews from critics including one from the Washington Post which called the series, ‘a funnier and more culturally relevant reimagining of Bayside High.’

Another review of the first season in Vulture glorified the pilot and said it, ‘may be the strongest first episode of a comedy I’ve seen all year.’

Bringing the cheer: Lexie Haddad-DeFrabrizio, played by Josie Totah, answers the phone alongside a number of fellow students