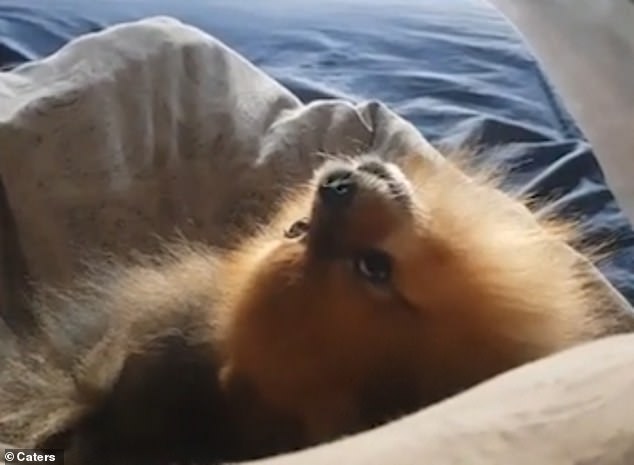 That’s barking! Leo the Pomeranian dog sounds like a MONKEY when he howls


We’ve all thought that our pets are cheeky monkeys from time to time – but this dog takes it to another level.

Leo, the six-year-old Pomeranian from Russia, makes a noise like a monkey when he howls.

Owner Maria Kosterina, 29, filmed her canine companion making the entertaining sounds on October 13 sitting on her sofa in Saint Petersburg.

The graphic designer says that she thinks the dog makes the bizarre noises when he misses human company.

Her video shows Leo throwing his head back to howl, prompting one viewer, Vince Lam, to comment: ‘The wolf is still strong in this one’ despite the monkey-like noises Leo lets out.

The Pomeranian is a popular variation of the German Spitz dog breed.

They are known to be very loyal and this is shown by Leo seeming pining for human company.

The variations of this breed include Pomeranians like Leo which a popular breed for companionship across Europe.

Pomeranians are also known to be a vocal breed with their emotions often expressed through their barks as Leo shows.

German Spitz are one of Russia’s most popular dog breeds.

There were 70,000 registrations of the fluffy double-coated dogs – including the Pomeranian variation – in 2017 in Russia.

The account has over 7,000 followers and also shows Leo in assorted outfits.