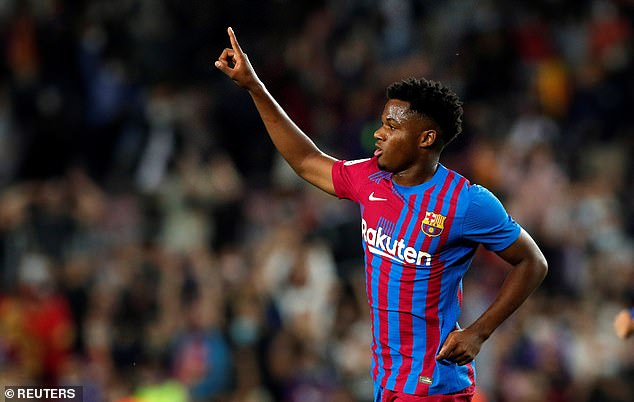 
Barcelona have secured Ansu Fati’s services for the next six years with a new contract that includes a £1billion buy-out clause.

The 18-year-old was rested for the first half against Dynamo Kiev with Ronald Koeman holding back his most important player for Sunday’s Clasico.

The second biggest cheer of the first half – after the one that greeted Gerard Pique’s goal – was for the sight of the teenager warming-up.

He came on at half time in Barcelona’s narrow win replacing Luuk de Jong and after the lacklustre win the club could at least allay supporters’ fears that Fati could be poached by a big European rival by announcing his new deal.

The record-breaking young striker had a contract until the end of this season with some controversy over whether it included an automatic renewal until 2024 or not.

The uncertainty over the existing contract no longer matters with the player’s agent Jorge Mendes having agreed the new bumper deal with Barcelona president Joan Laporta.

Fati has hit the ground running since finally coming back from a long injury lay-off. He missed most of last season, needing several operations on his left knee.

The club have been impressed with his comeback and by his attitude this summer. Lionel Messi’s number 10 shirt was up for grabs and it was offered to several players more senior than Fati.

They turned it down and when it was offered to him not only did he have the confidence to accept it he also had the grace to say he would only wear it if the Barcelona captains Pique, Sergio Busquets, Sergio Roberto and Marc Andre ter Stegen gave the all-clear.

Sergio Aguero – one of those who could have taken the shirt this summer – spoke in glowing terms about Fati in the lead-up to the game against Kiev.

He said: ‘The 10 fits Ansu nicely. He’s playing well and he has a very special talent. He is young and they have to let him grow.

‘We have to support him and make sure that he is comfortable on the pitch. He is one of those players that does not come around very often.’