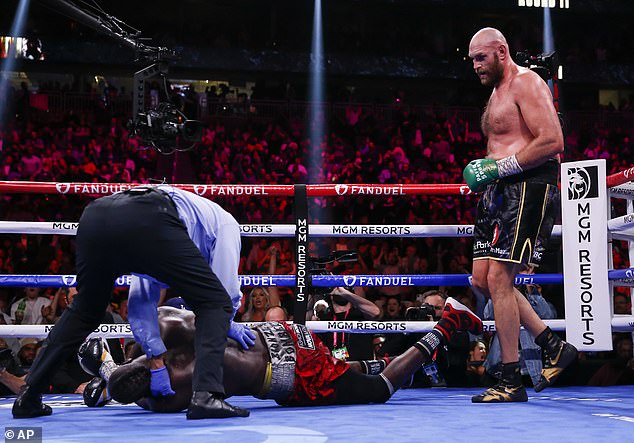 ‘Who has he fought? Deontay Wilder and Wladmir Klitschko?’: Tyson Fury ‘can’t call himself the greatest’ heavyweight of all time, insists Dillian Whyte – who is next-in-line for a world title shot against the Gypsy King


Dillian Whyte has rubbished claims that Tyson Fury is the greatest heavyweight boxer of all time.

The Gypsy King secured a historic victory over Deontay Wilder earlier this month to end their trilogy series and extend his undefeated record.

Fury declared himself the ‘greatest heavyweight of his era’ after the fight, while his victory led to some calls that Fury was the best of all time.

Despite admitting Fury’s status in the modern era, Whyte has slammed suggestions that the Gypsy King is the best heavyweight to ever enter the ring.

He said on CNN: ‘Who has he fought? Deontay Wilder and (Wladimir) Klitschko, he can’t call himself the greatest.

‘Okay, you might be the best heavyweight around in your era now because you haven’t lost, then you beat everyone put in front of you.

‘But you’re not the greatest. You haven’t even achieved half of what Lennox Lewis has achieved… Muhammad Ali, Joe Frazier, George Foreman – all of these guys.’

Whyte is currently the WBC ‘interim’ champion, putting him in line to challenge for Fury’s world title.

He was due to defend that status against Otto Wallin this weekend, until the British contender withdrew with a shoulder injury.

‘So what am I gonna do? Fight Otto Wallin or fight Tyson Fury, what are you gonna do? It’s common sense.

‘That’s for me and his team to sort out at the end of the day.

‘We don’t know what Tyson Fury is going to do. He might just tomorrow say “Yeah, that’s it. I’m done.”

‘He might go missing. He might disappear. We were ready before this fight. He’s pulled out of two fights with me before.’