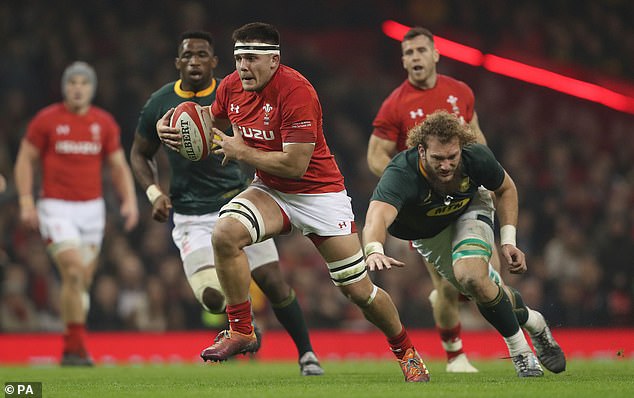 Ellis Jenkins to play in his first Wales Test for three years against world champions South Africa this weekend in place of injured Ross Moriarty, while Dan Biggar and Louis Rees-Zammit will also start

By Will Kelleher For Mailonline


Ellis Jenkins will play his first Wales Test in three years, facing the same opposition he badly injured his knee against in 2018, as Dan Biggar and Louis Rees-Zammit start against South Africa too.

Flanker Jenkins, 28, badly damaged several knee ligaments against the Springboks in the final throes of a man of the match performance and will return to the Welsh back-row 1,079 days later.

He is in for the injured Ross Moriarty, who is out for months like captain Alun Wyn Jones having suffered a shoulder injury. Jenkins will start wearing No 6 with back-row tyros Aaron Wainwright at No 8 and Taine Basham continuing at openside.

Replacing skipper Jones is lock Will Rowlands, one of six changes to Wayne Pivac’s starting XV having been thrashed 54-16 against New Zealand last week.

Biggar starts at fly-half, with Rees-Zammit on the wing and Nick Tompkins preferred to Johnny Williams at centre – the English-based trio back from their exile having missed the out-of-window All Blacks Test.

Up front Rhys Carré plays instead of Wyn Jones as Gareth Anscombe moves to the bench easing out Rhys Priestland.

Liam Williams, recovered from an operation to remove his appendix last month, is fit to make the bench but Ken Owens has not made it after injuring his back last week.

It means uncapped Bradley Roberts, as well as prop WillGriff John, could make their debuts against the world champions who have not won in Cardiff since 2013.

‘It’s a big Test match and we need to get what we think is the best side out there. We’re looking forward to having this side out there on the weekend and it’ll be really interesting to see how we go.

‘There’s a lot of experience gone from the pack now and with what’s coming in terms of the South African pack, with their experience, it’s going to be a massive challenge for our boys and it’ll be interesting to see who steps up.

‘Field position in this game is going to be massive, with the scrum that’s coming and line out drive, so we have to make sure we’re smart in how we play the game.’