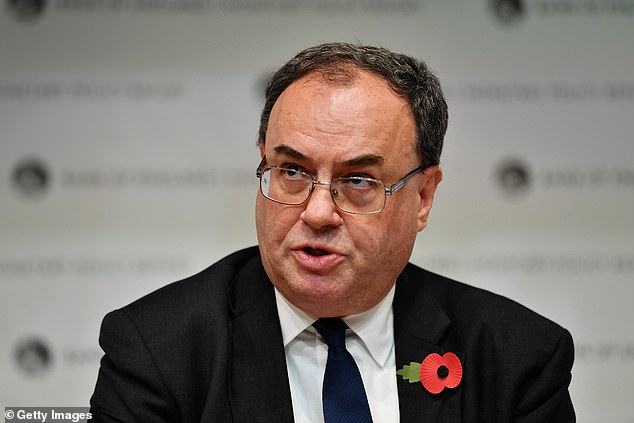 
Bank of England governor Andrew Bailey has apologised for rising prices – just a day after refusing to act to tame inflation.

Bailey said he was ‘sorry’ that households were being squeezed, and conceded that inflation was ‘biting’ on their finances.

But his comments to BBC Radio 4’s Today programme came after the Bank’s rate-setting Monetary Policy Committee (MPC) shocked traders by keeping interest rates at their record low of 0.1 per cent on Thursday.

Apology: Bank of England governor Andrew Bailey (pictured) said he was ‘sorry’ that households were being squeezed, and conceded that inflation was ‘biting’ on their finances

A hike in rates was widely expected, and would help tame inflation by encouraging households and businesses to spend rather than save.

But it could also put the brakes on the UK’s economic recovery. The MPC said it needed to see more evidence that the rebound was stable and that workers who were still on furlough when the scheme ended in September had found their way back into work.

Bailey said: ‘Inflation is clearly something that bites on people’s real household income. I’m sure they already are feeling that in terms of prices that are going up.

‘I’m very sorry that’s happening. We want to see the causes of inflation, which to a large degree are global and supply issues, tackled as soon as possible.’

Bailey repeated the comments he gave when the MPC announced its latest decision on Thursday that interest rates would rise over the ‘coming months’.

He said: ‘We expect interest rates to rise. We’ve been very clear and that’s deliberate.’

But in a blow to savers who have suffered through rock-bottom rates since the financial crisis, Bailey said rates would not be returning any time soon to the levels seen at the start of the decade.