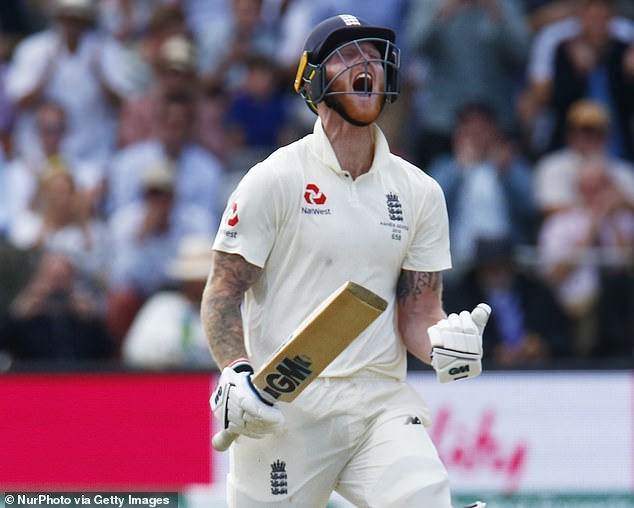 Ben Stokes shares emotional pictures of him hugging his two children goodbye with his bags packed before jetting off to Australia for the Ashes, with England star returning after break to protect his mental health


England all-rounder Ben Stokes bid an emotional farewell to his wife and two children on Instagram as he jetted off to Australia to begin preparations for the Ashes.

Stokes boarded the plane with Test captain Joe Root and senior bowlers Stuart Broad and James Anderson on Thursday as England players who are not competing at the ongoing T20 World Cup in the UAE made their way Down Under for their next winter assignment.

But the hero at Headingley in the 2019 Ashes series took to social media to share a photo of his children Layton, nine, and Libby, six, as well as wife Clare as he left the family home with his bags packed to travel to Australia.

In the caption, Stokes posted four hearts before writing: ‘I’m off… love you fam a lam.’

His wife also shared three pictures of Stokes hugging his children, writing: ‘Hate saying goodbye! But so proud and smiling through the tears!’

Speaking earlier this week, Stokes revealed he cannot wait to make his return in the ‘pinnacle of Test cricket’ following his hiatus from cricket to protect his mental health.

He told Sky Sports: ‘I just took it day by day, step by step. I had fantastic support around me to help me through, and I’m just excited to get out there. I cannot wait to see everyone, and I’ve just really enjoyed my training the last couple of weeks, so it’s good.

‘We have got a huge amount of experience in our squad, although we’ve got some young guys who are still learning their way in Test cricket.

‘We’ve got the likes of Jimmy [Anderson], [Stuart] Broady who have obviously been there, done that. [Joe] Rooty – fantastic leader and England’s greatest-ever batter, so we’ve got everything to come back at Australia with what they’ve got.

‘You are playing at the highest level possible and the Ashes – for an Englishman in Australia, that is the pinnacle of Test cricket.

‘It is the only series that is almost like a World Cup, because they are such rivals.’

Stokes revealed the first game he watched since his mental health break was England’s eight-wicket victory against the Aussies last Saturday in Group One of the T20 World Cup, which saw Jos Buttler smash 71 not out off just 32 balls.

‘The first full of game of cricket I actually watched since I took my break was England vs Australia,’ Stokes added.

‘I actually text Jos saying: ”I’m glad I chose that game to be the first one”, because it’s always great seeing England put in a performance like that, but even better against the Aussies.’

England captain Root meanwhile said this week of Stokes declaring himself available last week following finger surgery: ‘Obviously, it’s massive news. Speak to anyone within the game whether they’d prefer to have Ben in their team or not and everyone would say they would.

‘First and foremost, his performances on the field, especially against Australia in the recent past, have been outstanding.

‘For him to be involved again and back with a smile on his face playing cricket is an exciting prospect for all of us. Looking at how he performed in his debut series out there, that hundred he scored, the five-for in the last Test match…that shows he can perform in those conditions and those sort of wickets suit the kind of player he is.

‘We’re still managing expectations – he’s been out of the game a long time, he’s had a serious injury and he’s got a lot of work to do to get himself back to the Ben Stokes we all know.

‘But if there’s one thing we can bet on with Ben it’s that he’ll do everything he can to ready himself and then put in performances that help England win games of cricket.’