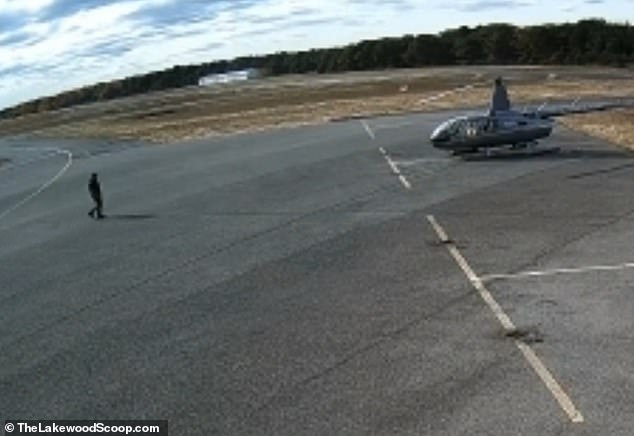 A rogue helicopter pilot led the NYPD on a chase over the New York skyline after picking up passengers at a vacant Brooklyn lot before flying 46 miles and landing at an airport in central New Jersey.

Witnesses in the residential Brooklyn neighborhood were stunned to see the helicopter touch down on the undeveloped corner lot in Crown Heights and pick up two passengers around 1:30 pm on Thursday.

‘It was something else — not something you see every day,’ one witness said.

The witness’s wife said she watched the helicopter take off and land twice, with  someone getting out briefly the second time, the New York Daily News reported.

The illegal helicopter flight took off from the undeveloped lot at the corner of Troy and Carroll Streets, which is bracketed by four-story row houses and surrounded mostly by doctors’ offices and butcher shops, as well as a yeshiva and a pole dancing studio.

The unidentified passengers boarded the chopper across the street from a large synagogue in the quickly gentrifying neighborhood before heading off to  Lakewood.

An NYPD patrol was alerted by air traffic controllers at JFK airport and followed the chopper to Lakewood Township Municipal Airport, where video shows the cops talking to the pilot.

Police approach an R66 helicopter that landed in Lakewood, New Jersey Thursday after leading the NYPD on a chase following an unauthorized landing to pick up passengers in Crown Heights, Brooklyn

Kevin McKenzie, the on-site manager of Lakewood Municipal Airport, said that the conversation between the pilot and the NYPD was ‘cordial’

The parking lot where the illegal landings took place

Footage from The Lakewood Scoop captures the police helicopter landing first and officers then walking over to the other copter as it lands.

The pilot of the chopper, which was an R66 Robinson based in New York, was allowed to take off again after a ‘cordial’ talk with police, according to Kevin McKenzie, the on-site manager of Lakewood Municipal Airport.

When asked for comment, the NYPD referred DailyMail.com to the Federal Aviation Administration, which is investigating the incident.

The FAA told DailyMail.com on Friday that the agency is aware of the incident ‘and looking into the matter.’

NYPD sources said that the pilot told police he didn’t know he couldn’t do that.

Air traffic controllers at JFK Airport in Queens said that the chopper had permission to be in the area, reports said.

McKenzie was skeptical the pilot didn’t know the landing rules.

‘Rules and regulations, they drill it in your head. You have to know it when you pass your test,’ McKenzie said. ‘You break the rules, someone’s going to find you.’

The helicopter eventually landed in Lakewood, a town in Central New Jersey

Helicopters have become a political issue in New York, as Congressional lawmakers and Manhattan’s borough president have launched a campaign to ban non-essential choppers from flying over the city.

‘This is completely obnoxious and dangerous. There should be a full and independent investigation of this incident,’ Manhattan Borough President Gale Brewer told DailyMail.com on Friday.

‘What happened yesterday in Brooklyn is yet another example of how helicopters are treating New York City like a “wild, wild, West.” Transportation Secretary Pete Buttigieg and the FAA need to crack down on risky and unsafe practices by helicopter operators.’

The city has three public-use heliports, all of which are located in Manhattan — at West 30th Street, East 34th Street and Pier 6 on the East River in Lower Manhattan.