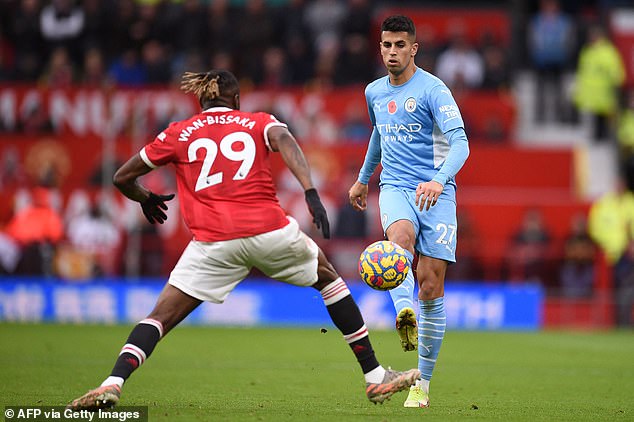 Gary Neville reveals he told Manchester United to sign City’s derby hero Joao Cancelo, back when he was coaching the then young ‘exceptional talent’ at Valencia five years ago


Gary Neville revealed he told Manchester United to sign Joao Cancelo after being impressed with the Portugal full-back during his time coaching Valencia.

Cancelo was the man-of-the-match in Manchester City’s 2-0 derby victory over United on Saturday, with the 27-year-old playing an important role in both of the Premier League champions’ goals at Old Trafford.

Neville managed Cancelo at Spanish club Valencia when the Sky Sports pundit spent nearly four months as head coach of the LaLiga side until March 2016, with the former United defender revealing that he called the Red Devils to get them to sign the full-back and now-Everton midfielder Andre Gomes.

‘I love him as a lad,’ Neville told his Sky Sports podcast when asked about Cancelo after Saturday’s derby. ‘I loved him when he was out there. There was a vulnerability about him as he was so young.

‘He’s so hard on himself, in training he used to be his (own) critic. If he made a mistake, he’d throw his arms on the ground and start cursing himself and I used to say to him “give yourself a break”.

‘I had him as a very young player at Valencia but you could just see exceptional talent. I made calls back to England, you could imagine which club I’m talking about, saying “if you’d ever take a young player, he’s one you’d take”.

‘Him and Andre Gomes I felt were exceptional talents that could come and grace the Premier League.’

After Neville was sacked by Valencia in March 2016, Cancelo spent one more year with the Spanish club before joining Inter Milan on loan for the 2017-18 campaign and then moving to Juventus for £35million in 2018.

The Portugal international would spend just one season in Turin, his displays helping the Old Lady to the 2018-19 Serie A title earned him a £60m transfer to City.

The defender has six goals and 11 assists for Guardiola’s side since making his move two years ago, with Cancelo winning the Premier League title last season while also being named in the PFA Team of the Year.

When the 27-year-old moved to City, Neville was left in no doubt that Cancelo would make a big impact on England’s top flight, but did have one concern about him.

‘The education Joao had in Italy would have been a good one for him,’ Neville said.

‘Then City paid £60m for him and the only doubt I had was the fact whether City needed to pay that money for a full-back again because they had players there.’