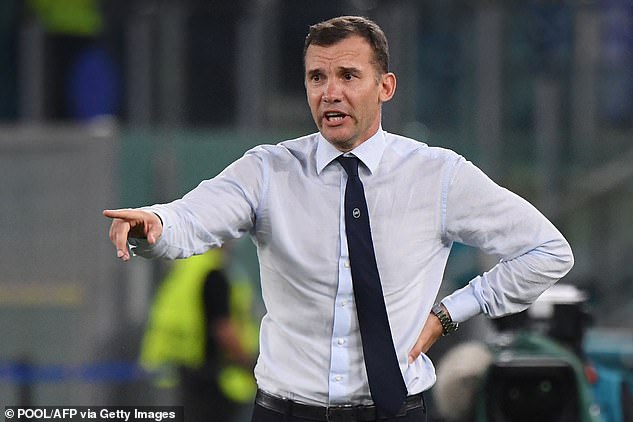 Shevchenko took charge of the Serie A side on Monday after replacing Davide Ballardini on a contract that runs until June 2024 and is thought to be worth £1.7million a season.

The new manager has been tasked with getting Genoa back into Europe but faces a tough challenge as his side currently sit just above the relegation zone in 17th.

The Ukrainian is targeting Chelsea’s Christian Pulisic (left), who just returned from injury

But on the day the Ukranian took charge, he has been reassured by the owners that investment will be made to boost his new squad, according to Secolo XIX via The Sun.

And the AC Milan is prepared to splash the cash on some high profile signings, including Pulisic and Zinchenko.

Shevchenko is reportedly monitoring Pulisic, who recently returned to Thomas Tuchel’s side following a spell on the sidelines with an ankle injury.

The Genoa boss is also pulling on his five-year stint as the manager of the Ukraine national team as he looks to add fellow countryman Zinchenko, who has been struggling for minutes at the Etihad this season.

The legendary striker is also turning to his old stomping ground, AC Milan, where he won the 2003 Coppa Italia and the 2004 league title as well as the 2003 Champions League.

Shevchenko is reportedly targeting Milan winger Samu Castillejo, while also keeping an eye on Vitaliy Mykolenko, who plays at another former side of his, Dynamo Kiev.

He faces a baptism on fire as his start to Serie A managerial life sees him take on his former boss Jose Mourinho and Roma after the international break.