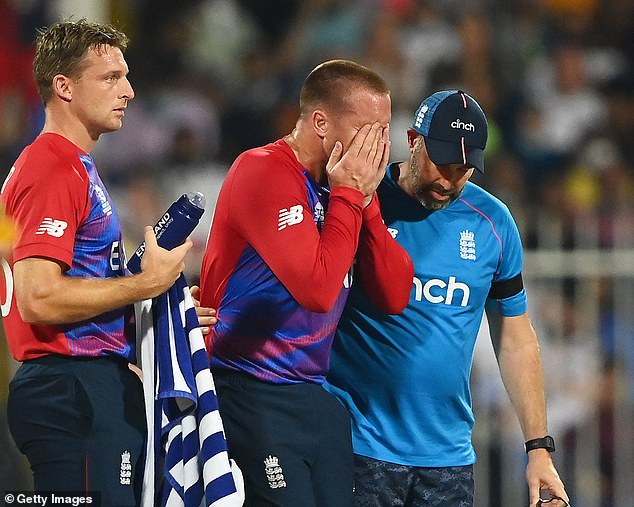 Jason Roy WILL miss the rest of the T20 World Cup: Huge blow for England as scans confirm explosive opener tore a calf muscle before being helped from the pitch in tears


Jason Roy will miss the rest of the T20 World Cup with a calf injury as England’s preparations for their semi-final against New Zealand in Abu Dhabi on Wednesday were dealt a major setback.

The in-form opening batter suffered the injury as England lost for the first time in their campaign against South Africa on Saturday, and a subsequent scan has drawn a line through his name for the remainder of the tournament.

James Vince has been brought into the squad, having been one of two remaining travelling reserves, with Roy joining left-arm quick Tymal Mills on the sidelines ahead of England’s most important T20 since the 2016 World Cup final.

Roy said: ‘I’m gutted to be ruled out of the World Cup. It is a bitter pill to swallow.

‘I will be staying on to support the boys, and hopefully, we can go all the way and lift that trophy. It has been an unbelievable journey so far, and we have to continue expressing ourselves and concentrating on us.

‘The rehab has already started, and even though I’ve torn my calf, I’m going to give myself the best chance of being ready for the T20 tour of the Caribbean at the start of next year.’

Roy has amassed 123 runs in five innings at a 30.75 average and strike-rate of 138.2 in a tournament where he and Jos Buttler have set the tone at the top of the order and England need little reminding of his value to the team.

That was evident during the 2019 50-over World Cup group stage, when a torn hamstring meant he missed the defeats to Australia and Sri Lanka before his comeback corresponded with an upturn in fortunes for the eventual champions.

England pipped New Zealand in the final on boundary countback alone while the two teams also faced off in this competition five years ago, when Roy’s 78 off 44 balls helped Morgan’s side prevail in the last-four clash.

England came out to the Gulf without Ben Stokes, Jofra Archer and Sam Curran, while Mills has succumbed to a right thigh strain and Roy has now joined the casualty list with an injury that looked an immediate concern at Sharjah.

After being called through for a single, Roy took a couple of strides forward, hobbled the rest of the way and then fell down in evident pain before being helped from the field, seemingly on the verge of tears as he retired hurt.

He was seen on crutches after England’s 10-run loss to the Proteas – with Eoin Morgan’s side still qualifying for the semis as winners of their Super 12s group – plunging his participation in the rest of the tournament into doubt.

While Vince has been parachuted into the 15-strong group, it may be that Sam Billings will come into the middle order, with one of Dawid Malan, Jonny Bairstow, Moeen Ali or Liam Livingstone opening alongside Buttler.

An alternative is to bolster a bowling line-up that collected just two wickets and leaked 189 runs against South Africa. In that scenario the left-arm seam of David Willey, also handy with the bat, presents a tempting option.