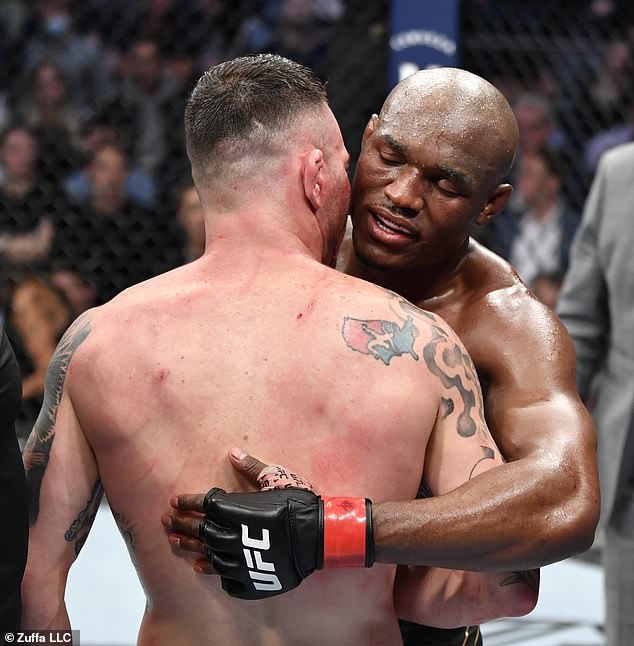 ‘He’s the Joe Frazier to my Muhammad Ali’: Kamaru Usman admits ‘tough as nails’ Colby Covington has earned his respect despite their bad blood and he was ‘not surprised’ by fierce rival’s embrace after UFC 268 rematch


Kamaru Usman has lavished praise on Colby Covington and revealed that their bad blood has finally made way for mutual respect after another brutal fight.

The ‘Nigerian Nightmare’ defended his welterweight title against his close rival at UFC 268 and despite all the toxic build-up to both encounters, they shared an embrace at the end.

Usman has declined to say what words were exchanged but has since reflected that Covington is the Joe Frazier to his Muhammad Ali and is even open to a third fight further down the line.

When asked if he was surprised at Covington showing respect afterwards, he said: ‘I’m not surprised. We’ve shared pretty much an hour with each other inside that cage.

‘I don’t care who you are, there’s a mutual respect that just comes alive. It’s the spirit of competition. The spirit of martial arts. I respect him. That’s the next best guy in the division.

‘This guy’s tough as nails. This guy’s very, very tough. Let’s be honest, [Muhammad] Ali needed a [Joe] Frazier. All these guys, you can be the great one but there’s always going to be that one guy that’s going to be able to push you and he is that guy.’

Covington’s divisive antics outside of the cage have made him must-see TV and while Usman has not changed his view on that, as a fighter, he has no choice but to give him credit.

‘As much of him outside the octagon that most people don’t like, myself included, you have to respect him as a competitor,’ he went on.

‘That guy’s tough. He’ll tune up a lot of guys in the division. We’ll see. It’s up to him. If he’s willing to do the work and get back up here and if I’m still here, then we’ll make it happen.’

Usman dropped Covington twice in the second round on Saturday night and looked as though he could have found a finish.

But the challenger showed incredible resilience to battle through and even shift momentum in the following round.

If Leon Edwards defeats Jorge Masvidal on December 11, the British star could well be next in line for Usman in 2022.