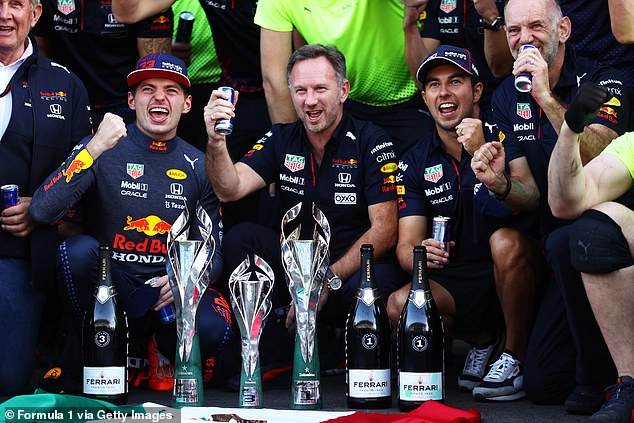 Another race down and another step closer for Red Bull.

Not since 2013 have they been able to toast a world championship driver in their garage and yet they now have Max Verstappen 19 points clear of Lewis Hamilton with four races remaining.

His pace in Mexico City was electric and almost impossible for Mercedes to compete with, even with Hamilton in second.

Hamilton and Mercedes know it isn’t over, much like Verstappen and Red Bull will be leaving the champagne they have on ice for now with one DNF or a botched strategy swinging the momentum back to a rival.

What Mexico did show us is that Red Bull and their Honda engine hold all the aces right now and should Hamilton turn it around and win an eighth world title, it would be in the discussion for his finest of all.

But aside from the jostling title rivals, there was a big weekend for Ferrari in the constructors’ chase, Valtteri Bottas proved Mercedes right for cutting their losses and some chippy drivers need to watch their tone with engineers.

HAMILTON IS OUT OF ANSWERS

‘There was nothing I could do to battle that,’ Hamilton said.

‘Their car is far superior this weekend and there was nothing we could really do about it. I gave it absolutely everything.’

For years, since he was beaten to the title by team-mate Nico Rosberg in 2016, Hamilton has had it his way, a world championship wrapped up with races to spare.

But now Mercedes aren’t the fastest car on the track and they don’t have the fastest driver. It’s difficult to overcome those two things to stay on top.

In recent weeks the belief among some in the motorsport cognoscenti was that Hamilton has the experience and the nous to pull himself over the line in the title fight.

Yet, victory in Mexico took Verstappen’s season win total to nine, with Hamilton down at five.

Factor in that since the summer break, which came at the worst time with Red Bull on the slide and in urgent need of a reset, Hamilton has won just the one race and the signs don’t look all that promising, making it trickier and trickier for the Brit to work out.

There are 107 points available from the final four rounds and Hamilton, unsurprisingly, wants his Mercedes team to ‘dig deep’.

They may need to root around for some Lady Luck to turn the tide back in their favour.

One of the things that will frustrate Hamilton is that Verstappen is showing no sign of cracking under pressure.

The level of scrutiny and intensity these two face each race weekend is enormous and in his first true title battle, Verstappen is handling it with a maturity well beyond his years.

If anything, it is Hamilton, in the eyes of fellow driver Fernando Alonso, that will buckle.

‘Do I think Lewis will succumb to the pressure? Yes, thanks to Max – 100 per cent,’ Alonso, a two-time world champion, told Dutch newspaper De Telegraaf recently.

‘When Lewis only has to fight with his team-mate Valtteri Bottas for the title, everything is great. Now he feels some pressure and he gets into trouble.’

Alpine driver Alonso added: ‘The way Max stepped in at Red Bull and was right there, I don’t think anyone is capable of doing that.’

A ninth win in a single season with a Honda engine saw Verstappen pass the record of eight by the legendary Ayrton Senna. Not bad company to find yourself in.

Watching Verstappen it just seems in no doubt that he will see this title over the line now.

That’s certainly the view of another F1 legend in Sir Jackie Stewart.

‘I think Verstappen is going to win it,’ Stewart told Sky Sports F1.

‘I think the Red Bull now is going, the Honda is obviously good, very good, the team knows how to win.’

It’s been a while for Red Bull, this is their eighth attempt at breaking Mercedes’ dominance, but winning habits live on from those Sebastien Vettel days.

MCLAREN-FERRARI FIGHT TO GO TO THE WIRE

McLaren need to reset with four races to go as Mexico saw them leapfrogged by Ferrari, who now sit third.

Outscored 18 points to one, McLaren know the momentum is with the Prancing Horse of Italy and P5 and P6 finishes for Charles Leclerc and Carlos Sainz will do little to inspire McLaren that they are on track to be best of the rest.

‘We did what we wanted, which was to outscore McLaren by a fair bit,’ Sainz said.

‘We had a good opportunity this weekend, we managed it, and now we go into the last four races of the season with the upper hand in the championship.

‘It’s going to be tight, I think there’s going to be tracks where they’re going to have the quicker car but now we need to focus to keep working well as a team like we did today, and keep going forward.’

The Spaniard is right, they have the upper hand heading into a season finale of Brazil, Qatar, Saudi Arabia and Abu Dhabi.

McLaren have not managed to get a driver finishing ahead of both Ferrari cars since they nabbed a 1-2 finish at the Italian Grand Prix in mid-September.

The issue is consistency now and scraping into the top 10 while a team-mate misses out on the points won’t cut it with Ferrari stitching it together at the right time.

‘We are motivated, we’re working hard but I think it’s tough,’ Norris said prior to finishing 10th in Mexico.

‘We’re working hard, everyone back in the factory is working hard to try and find these last little things we need for the rest of the season.

‘But Ferrari are strong, you’ve got to give it to them. They’ve come on very strong in the second half of the season and especially the last few weekends.

‘So we’re putting up a fight, and we can definitely bring it to them to the end. That’s the plan.’

The title race may not hinge on Abu Dhabi but don’t be surprised if the battle for third heads to the kingdom on a knife edge.

MOVING ON FROM BOTTAS IS THE RIGHT CALL

For months there was talk of whether Mercedes really would bite the bullet and ditch Valtteri Bottas for 2022. Now their decision has been vindicated in the eyes of any doubters.

Bottas has long been a reliable team-mate of Hamilton – infamously labelled a ‘wingman’ by team principal Toto Wolff – and the British champion initially appeared reticent when it was confirmed George Russell would replace Bottas next season.

And while he managed to pull off a surprise pole position, a botched start to the race saw him spin off, relinquish the lead and allow Verstappen, who started third, to ride off into the sunset for another win.

‘That should not happen,’ Wolff said of Bottas’ start. ‘I think we had two cars in front and we seemed to open up the sea for Max to come around the outside.

‘Even so, the spin afterwards and the complete loss of points with Valtteri’s car when it could have been a third or fourth place is annoying to say the least.’

Even Hamilton, a staunch supporter of Bottas given how useful he has proven to be in helping him with his championship wins, had to accept the poor start ‘left the door open’ for Red Bull to tighten their grip in the championship race.

‘I had envisaged it differently, naturally, in the sense that Valtteri maybe would get a better start and I would have tried to get into his tow,’ Hamilton said .

‘I was obviously alongside him, which was good, and then I was just covering my side of the track trying to make sure no one could come up the inside.

‘So I was trying to keep whichever Red Bull I could see in my mirror behind. I thought Valtteri would be doing the same but obviously he left the door open for Max.

Bottas, who finished 15th, heads to Alfa Romeo next year to replace Kimi Raikkonen where he will be fighting for the midfield. He’s been a valuable asset to Mercedes over the years but getting rid now is the right call, Mexico simply confirmed it.

TETCHY DRIVERS LOSING IT WITH ENGINEERS

Strategy is a big thing in F1 and more often than not drivers are quick to lambast their team when it goes wrong.

When it goes right little is mentioned but when it goes the other way it’s all the seething drivers want to discuss and Mexico was no different for two near the back of the field.

First, take Alfa Romeo’s Antonio Giovinazzi. His tetchiness with four races to go is understandable given he has no assurance if he will still be part of F1 for the 2022 season, with the final Alfa spot yet to be filled.

And so when Giovinazzi, who is under pressure to impress to salvage his F1 career, finished 11th and outside the points, his radio debrief when crossing the line was laced with sarcasm.

‘Hey guys, thanks for the great strategy,’ the Italian driver moaned.

He was still furious when it came to shuffling around the media pen to face the questions of the press pack.

‘I am disappointed and angry,’ Giovinazzi told Sky Italia, having felt wronged at being made to pit before McLaren’s Daniel Ricciardo and Mercedes’ Bottas.

‘They called me in and I came back out behind Ricciardo and Bottas, who had not yet stopped. So the pace was slower than on the medium. Then the tyres were completely gone and the drivers who stopped later were faster than me. Absolutely the wrong strategy.’

Without the guarantee of a seat next year, Giovinazzi’s grumblings make some sense but over at Haas, rookie Nikita Mazepin, who is being kept on for 2022, found strategy is no laughing matter in Mexico City.

The Russian asked Haas engineers if he was able to swap places with team-mate Mick Schumacher ‘because he was going so slowly’.

Mazepin was told no, stay in the order.

‘Are you having a laugh?’ he hit back.

Mazepin needs to be careful which words he chooses having suggested to reporters that ‘the rules are slightly different’ for him and for Schumacher.

‘It looks like the rules are slightly different for the two sides of the garage,’ he said.

‘I have already found myself in difficult situations – in fact, this has happened before. No doubt I’ll get over it. But right now is not an easy time for me.’