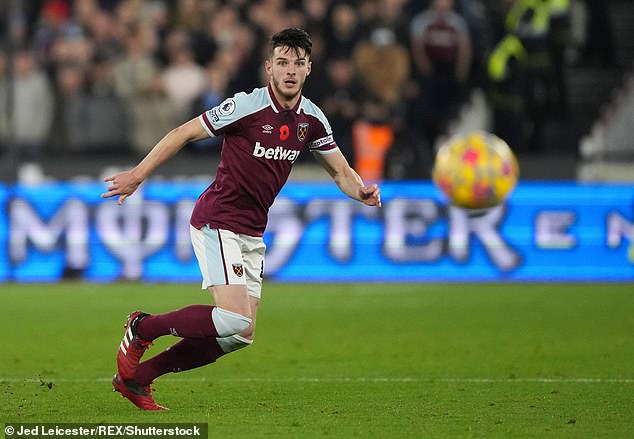 
Manchester United should have prioritised a defensive midfielder in the summer transfer window according to Trevor Sinclair.

The Red Devils have struggled this season despite making some big moves over the summer for Cristiano Ronaldo, Jadon Sancho and Raphael Varane.

Ole Gunnar Solskjaer’s side were dominated by local rivals Man City at the weekend – just two weeks after Liverpool also came to Old Trafford and thumped them 5-0.

Sinclair has told talkSport that United made an error by signing Sancho and Ronaldo but not bringing in a defensive midfielder.

‘Declan Rice, if he’s playing with Scott McTominay or Fred, the difference in performance in that Man United team would be vast, vastly different.’

Sinclair’s comments echoed those he made following West Ham’s win against Everton in October.

He said at the time: ‘Rice was playing against (Abdoulaye) Doucoure at Everton – and he had just ruined Manchester United. He (Rice) left him in his shadow. Doucoure could not get anywhere near him.

‘It was one of the most thorough midfield performances I’ve seen in a long time – with the ball, without the ball, disciplined.

‘He’s 22. If Manchester United could’ve got someone like Rice in, I don’t think we’re having this conversation.’

Sinclair is not the only one to have praised the England international, with legendary Chelsea defender John Terry describing Rice as the ‘best in his position in world football’.

Manchester United have struggled in recent times, with the Red Devils losing four out of their last six Premier League games.

West Ham meanwhile have made a stunning start to the season and sit third in the standings – just three points off the top of the table.

Rice starred for the Hammers at the weekend as they handed Liverpool their first defeat of the season in all competitions with a 3-2 victory at the London Stadium.