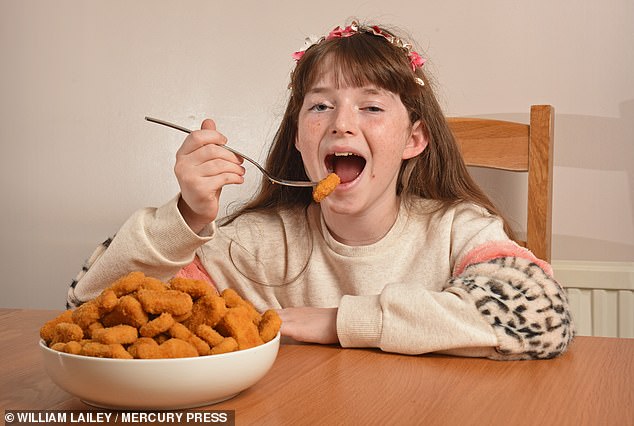 A schoolgirl who lived off chicken nuggets for a decade has finally overcome her food phobia.

Her mum, Julia Cain, 49, a graphic designer, has no idea what triggered the anxiety and panic surrounding food – but after seeking professional help Jessica was diagnosed with Avoidant Restrictive Food Intake Disorder (ARFID) in September.

People who suffered ARFID develop a phobia of certain foods’ texture, smell of general appearance and will refuse to try them.

Now after just a few weeks of work with her hypnotherapist, Jessica can finally enjoy a full roast dinner, as well as lots of fruit and vegetables in her home.

Jessica Thompson, 11, from Swindon, Wiltshire has only ever eaten chicken nuggets since she was 18 months old after developing a food phobia known as Avoidant Restrictive Food Intake Disorder (ARFID)

Her mother Julia, right, said Jessica would rather starve than eat anything other than chicken nuggets

Julia said: ‘She was eating all her baby food and she was trying lots of new food.

‘Then it just stopped, and she would only eat chicken nuggets.

‘She’d have about three or four with fries as a meal, but usually didn’t finish it.

‘In her lunch box, she’d just have plain bread, with nothing on it or in it.

The poultry enthusiast, pictured, has been seeing a hypnotherapist after her diagnosis and has finally eaten her first roast ever

‘As a family, we have never tucked into a Christmas dinner altogether because Jessica would refuse to even try one.

‘She would have a plate of nuggets and one year, she had a slice of dry bread.

‘People would always say, “She will grow out of it”, or “If you don’t give in she’ll get hungry and eat what you give her”.

‘The problem is, Jessica would literally rather starve than eat some foods.

‘Sometimes she would crawl into a ball to get away from the food.

‘We knew she was more than fussy but we never thought she would spend a decade of her life eating chicken nuggets.’

Jessica, pictured, ate normally until she reached 18 months old, but then refused to eat anything other than nuggets

The 11-year-old, pictured, has to listen to relaxing tracks and keep an achievement chart in order to overcome her food phobia

Doctors told Julia for years that Jessica was just being fussy, and well-meaning people told the mother not to give in to Jessica’s fussiness

Jessica was branded as ‘fussy’ by doctors over the years, and over the years stuck to beige foods like nuggets, plain bread, and fries.

What is avoidant/ restrictive food intake disorder (ARFID) and how does it affect people?

ARFID is when someone avoids certain foods, limits how much they eat or does both.

Beliefs about weight or body shape are not reasons why people develop ARFID.

Possible reasons for ARFID include:

Julia said: ‘They would all say she’s just being fussy, or she’s having tummy troubles.

‘As a parent, all you want is for your child to eat.

‘People really don’t understand that it is an illness, not just fussiness.’

After just three weeks with him, listening to relaxation MP4s before meals, and using an achievement chart, Jessica can now enjoy a roast with her family.

He said: ‘Julia contacted me worried and concerned about the limited foods that her daughter Jessica was restricted to, just chicken nuggets and very little else.

‘Chicken nuggets are not a whole food group and Jessica came to me extremely unwell, lethargic and anxious.

‘Trying to get Jessica or any person with ARFID to consume is like trying to get an arachnophobe to hold a spider.

‘It sends panic through a persons body retching, gagging and vomiting – just at the thought of an unsafe or new food.’

For relieved mum Julia, Jessica’s achievement means for the first time in 10 years the whole family can sit down together and enjoy a meal.

Julia said: ‘It’s nothing short of a miracle that Jessica can eat a full plate of food now.

‘We hadn’t eaten a meal together as a family for years, and now we can.

‘She’s tried 24 new foods, and even though she hasn’t liked all of them, this is a massive step forward for her.’

Proud mother Julia, left, said Jessica has tried 24 new foods since she was diagnosed with ARFID in September

Desperate Julia, right, admitted the family had not eaten a meal together in years due to Jessica’s food habits