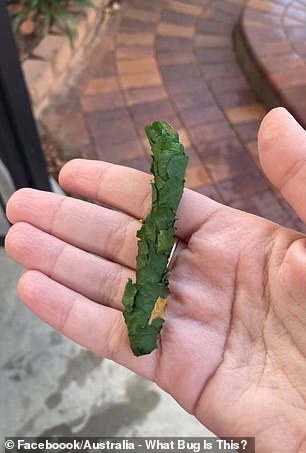 
An Aussie woman was baffled after finding a strange green ‘rod’ in a towel left in her backyard.

She posted an image of the hollow leafy cylinder to popular Facebook group ‘Australia  – What Bug Is This?’ and commenters were quick to point out the culprit.

The cigar-like rod is the nest of the Megachile Leafcutter Bee commonly found in backyards all over Australia.

If you’ve spotted strange holes carved out of your garden plants, your yard may also be home to a leafcutter bee who will cut neat circular disks out of soft leaves to build their nests.

Leafcutter bees commonly build their nests in folded towels left outside as well as gaps in door and window frames, and holes in rock or wood walls and outdoor furniture.

The leafcutter bee makes a friendly and harmless backyard resident and some gardeners and farmers even encourage their presence as they ensure healthy pollination.

They are solitary bees and are not aggressive, will only sting if in serious danger and do no damage to plants with their leaf cut outs.

If you find a leafcutter bee nest it is advised to handle with care and put the nest near where you found it so the bee’s hard work doesn’t go to waste.