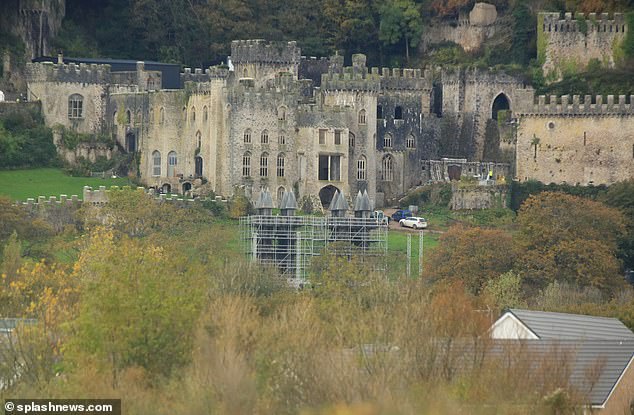 I’m A Celebrity: Renovations are carried out at Gwrych Castle as two towers are constructed at the entrance ahead of new series


The I’m A Celebrity… Get Me Out Of Here 2021 stars have started their two weeks of isolation ahead of the new series.

And renovations at Gwrych Castle are nearing completion ahead of the new series kicking off later this month.

Two towers were seen being constructed on the grounds of the castle in North Wales on Saturday.

Preparations: Renovations at Gwrych Castle are nearing completion ahead of the new series of I’m A Celebrity… Get Me Out Of Here! kicking off later this month

The towers, which had eight pointed sides, were surrounded by scaffolding.

Up the stairs of the castle, several crew members could be seen on ladders carrying out the finishing touches to the property.

A large white marquee had been set up behind the castle for the production to make use of.

It comes after some of the celebs were spotted moving into cottages in Angelsey near Gwrych Castle, the ITV show’s location for the second year running, over the weekend.

Production: Two towers were seen being constructed on the grounds of the castle in North Wales on Saturday

The stars have been treated to luxury holiday homes which boast vaulted ceilings and weather-proof windows and sliding doors which frame idyllic views.

Producers are going to create a bubble for the famous faces which will attempt to avoid rows over vaccinations and keep them safe once in quarantine.

A show spokesperson previously told MailOnline: ‘Like last year, our celebrities will do a two week quarantine with regular testing prior to entering the castle, and will then form a bubble for the duration of their time on the show.’

Last year, I’m A Celebrity required the celebrities to wear proximity monitors which flashed and buzzed when they came too close to one another.

Wow: The stars are staying in luxury holiday homes for their two-week isolation which boast vaulted ceilings and weather-proof windows and sliding doors which frame idyllic views

Bosses also scaled down the production team, and had cameras set up already on-site so cameramen didn’t have to be on the set.

The stars will all be heading to Gwrych Castle in north Wales for series 21 which starts on November 21.

Stars: Producers are going to create a bubble for the famous faces which will attempt to avoid rows over vaccinations and keep them safe once in quarantine (pictured left, Richard Madeley, and right, Frankie Bridge)

Hosts Ant and Dec are set to welcome the new batch of stars to the site in a number of days, with the show taking place in Wales rather than Australia for the second year running in light of the pandemic.

A former forward, David played football for ten seasons in France before moving from Paris Saint-Germain to Newcastle United in the English Premier League in July 1995.

She was a member of the judging panel for Strictly for four years up until 2008. She now works in theatre and it still a choreographer.

Beginning in 2012, Minchin was a regular anchor on the BBC One programme Breakfast, co-hosting the show three days a week with Dan Walker. She recently stepped down from her role.

Matty is a British diver and Olympic gold medallist who competed at the Tokyo Games with Tom Daley in the synchronized events.

Frankie was formerly a member of S Club 8 and girl group The Saturdays. She is now a Loose Women panellist and shares two children with her husband Wayne.

Simon is best known for his portrayal of Steve McDonald in the long-running ITV soap opera Coronation Street since 1989.

Snoochie is a model, brand ambassador, presenter as well as a DJ.

Danny is known for portraying the role of Aaron Dingle in the long-running ITV soap opera Emmerdale, for which he has won the British Soap Award for Best Actor in 2011, 2012 and 2016.

Adam is best known for his role as Ian Beale in EastEnders. Alongside Jane Slaughter, he is the programme’s longest-serving cast member, having played the role since the first episode in 1985.

Richard is a journalist, television presenter and writer. Alongside his wife Judy Finnigan, he presented This Morning and the chat show Richard & Judy. He now presents GMB.