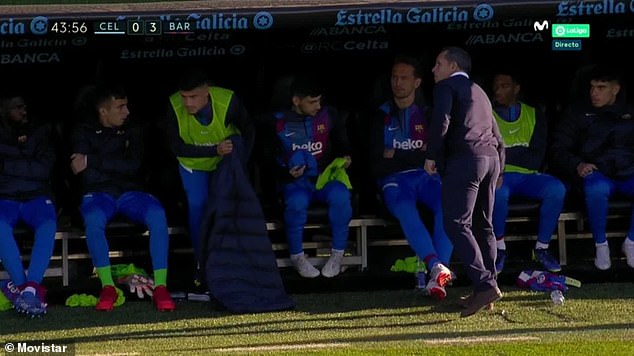 ‘I have NEVER been unprofessional’: £145m flop Philippe Coutinho hits back at claims he is not committed to Barcelona after his ‘lazy’ warm-up as a substitute during draw against Celta Vigo… with caretaker boss deciding NOT to bring him on


Philippe Coutinho has defended his commitment to Barcelona after he was accused of lacking professionalism following a sluggish warm-up at Celta Vigo on Saturday.

The former Liverpool midfielder started the LaLiga clash on the bench but interim manager Sergi Barjuan reportedly asked him to get ready for action when winger Ansu Fati picked up an injury.

But Coutinho attracted criticism for his lethargic routine on the touchline, which was described as ‘excessive laziness’ by Spanish newspaper SPORT.

Coutinho eventually didn’t even come on as a substitute during the game, with Alejandro Balde replacing Fati instead.

Speaking after the game, Barjuan insisted he had not noticed Coutinho’s efforts on the touchline when deciding who to bring on.

He said: ‘I didn’t focus on any of that, I was watching the game, which was very demanding. In 10 days I’ve felt everyone gets along with me.

‘It’s clear that with those who haven’t played it’s harder. I’ve had to take decisions and he did not play today.’

But Coutinho defended himself in a press conference while away on international duty with Brazil, insisting his professionalism cannot be questioned.

The 29-year-old said: ‘I was very surprised when I saw the news because in all my career I have never been unprofessional.

‘They can look wherever I went, I always respected everyone.

Despite making 11 appearances for Barcelona this season, Coutinho has scored just one goal

After missing the opening few games of the LaLiga season, Coutinho believes he is finally fully fit again and ready to start a run of games under new manager Xavi.

He added: ‘It was not easy to be out for so long but I feel very good. Physically I’m well and I have no pain or problems, now what I need is time to find my best level.

‘Since I returned to play I did not have a sequence of four or five games starting from the beginning to be at my best level. I feel very good, physically I am.’

Despite making 11 appearances in all competitions, Coutinho has scored just one goal and contributed zero assists so far this season.

Yet he has won a place in the Brazilian squad for this month’s pair of World Cup qualifiers against Colombia and Argentina.