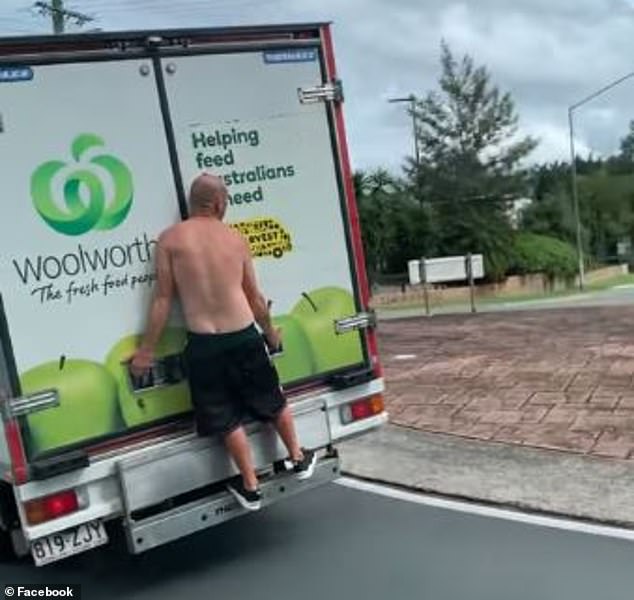 
Video of a shirtless man bizarrely clinging to the back of a speeding delivery truck, in what looks like a stunt, has divided social media.

The footage, of a large bald man with loose-fitting shorts riding the back of a Woolworths delivery truck emerged on Tuesday afternoon.

In the clip, the truck flying around a roundabout, with the driver apparently unaware of the stowaway hitching a ride while hanging onto the back doors.

It was posted to social media by a member of the public, making light of the man’s antics.

Video of a man in low-slung pants clinging to the back of a delivery truck has divided social media, with one Facebook user worried that he may be unable to correct the situation if his loose-fitting pants fell

‘Hope the driver gets a new truck for Xmas as it has a bad crack in it.’

The poster was heard saying ‘Only at Beenleigh!’ in the video.

He tagged Woolworths in his post and the retail giant replied asking for further details.

‘We’ve reported this matter to the Queensland Police and asked our delivery partner to look into it as well.’

‘People like this guy generally occupy the lower branches of the evolutionary tree, not difficult to see why,’ wrote Facebook user Stew.

Plenty joked about the man’s clearly dangerous behaviour though.

‘What’s even worse is that he looks like he is about to lose his shorts! Won’t be pretty,’ wrote Darrell.

‘Me when I find out the truck is carrying cheese,’ one woman commented.