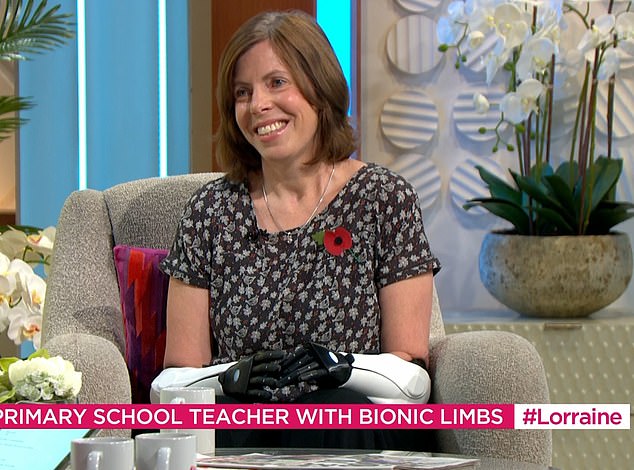 A school teacher fitted with futuristic bionic arms has revealed how her life changed forever in just one weekend after she was struck down by sudden septic shock – saying her two young children were brought in ‘to say goodbye’ to her.

Kath Tregenna, 47, a teacher at the International School of London, developed a fever while teaching on a Friday afternoon in November 2019 and left her classroom early ‘thinking I had the flu’ – with no idea how in danger her life was.

The primary school teacher told Lorraine on Wednesday that when her symptoms didn’t improve over the weekend, she called NHS 111 for help and the call handler spotted signs of sepsis and immediatly called an ambulance.

Primary school teacher Kath Tregenna , from London, developed ‘flu-like symptoms’ in November 2019 while in the classroom and two days later was rushed to hospital with sudden septic shock – doctors were forced to amputate all four of her limbs

The teacher, 47, said her two young children have had ‘the most horrendous time’ since she fell ill, and were brought into the hospital to say goodbye to their mother after she suffered multiple organ failure

The 3D bionic hands are expensive and unavailable on the NHS – but Tregenna said her pupils helped fundraise almost £30,000 to buy them from a Bristol-based company

Tregenna said: ‘On the Sunday afternoon, I called 111, and they sent an ambulance, which quite possibly saved my life. I was rushed to hospital, and that same evening I had multiple cardiac arrests and multiple organ failure. It was so fast.’

In a bid to prevent the spread of the sepsis, doctors later amputated both of her legs below the knee and both arms below the elbow.

The mother-of-two had been teaching primary school pupils at the International School of London, in the west of the capital, when she developed the infection – and has been fighting to get back to her career ever since the illness struck.

She told Lorraine: ‘It takes a long time to come to terms with. I’m a mum, I wanted to be an active mum and I loved teaching and I was determined to get back in the clasroom.’

The teacher told Lorraine: ‘I’m a mum, I wanted to be an active mum and I loved teaching and I was determined to get back in the clasroom.’

She told Lorraine that her recovery has been difficult, saying: ‘I was so excited to be made legs but it’s hard, it’s really hard, it’s still ongoing now.’

Her pupils are ‘curious’ about her new arms, she says, asking questions about whether she can ‘feel’ with them

The Hero Arms were created using 3D printing and scanners. They use myoelectric sensors which detect muscle movements in the limb and turn them into hand movements.

The teacher said while learning how to use the hands and legs had been hard, they have enabled her to resume her career for a few hours a week.

On walking again, she said: ‘I was so excited to be made legs but it’s hard, it’s really hard, it’s still ongoing now.’

When Lorraine asked her how her own children had dealt with her illness and recovery, she said: ‘They’ve been through the most horrendous times – they were brought in to say goodbye to me.’

Tregenna says she removes the arms to hug her children because she doesn’t have any sensation in them but says her school pupils are fascinated by them – and held fundraising events to help their teacher get back to work.

‘Children are so curious – it gets their minds wondering…they’ve asked will I be able to touch and feel one day?’

She said: ‘It’s all thanks to arms I am able to teach again. From writing on the school board to carrying books, children are obsessed with the Hero Arms and always ask me to show how they work.

‘From the moment I arrive at school, I’m using the arms to do all sorts of tasks.’

The Daily Mail launched the End the Sepsis Scandal campaign with the UK Sepsis Trust in 2016 to raise awareness of symptoms among patients and staff.

Discussing her initial sepsis diagnosis, the teacher said she caught what she thought was common sickness but didn’t realise her symptoms were potentially fatal.

Mrs Tregenna said: ‘I owe my life to the 111 operator who noticed some of the symptoms of sepsis and called an ambulance.’

Listen up! Writing on a board with a bionic arm

She added: ‘Going out wearing the arms actually makes me feel very, very confident. They just enable me to carry out a range of classroom activities.’

Samantha Payne, co-founder of Open Bionics, said: ‘Kath is incredible. Our entire team is in awe of Kath’s determination to get back to doing what she loves most – teaching.

‘Seeing her using both of her Hero Arms for everyday things really puts into perspective how important bionic technology can be when it comes to giving people recovering from life-changing surgeries a level of independence to achieve their goals.’