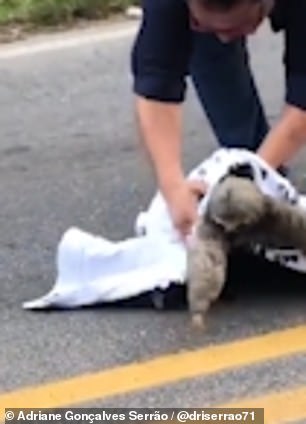 ‘It’s too pure for this world!’ Viewers gush over viral video of sloth ‘thanking’ a man after he rescued it from the road and carried it to safety


A video of a sloth being carried across a road to safety has gone viral, with viewers saying it is ‘too pure for this world’.

The footage, captured by Adriane Gonçalves Serrão of Caieiras, Brazil, shows the moment a man swooped down to pick up a sloth that was attempting to cross a road and take it to a nearby tree.

At the end of the clip, which was shared on Twitter, the sloth turns around and seems to thank the man by gently touching his hand with his three-fingered-paw.

Animal lovers swooned over the ‘beautiful’ interaction and said it was the ‘best thing they had seen’.

However an expert warned the sloth was not thanking the rescuer, but was protecting itself from a perceived threat.

The footage, captured by Adriane Gonçalves Serrão of Caieiras, Brazil, shows the moment a man swooped down to pick up a sloth that was attempting to cross a road (left) and take it to a nearby tree (right)

The Good Samaritan stopped traffic and parked his car in the middle of the road to rescue the animal, which was slowly making its way across.

An adult sloth can reach speeds of up to 0.27 km/h. In comparison, humans walk at an average pace of 5km per hour.

The man gently picked the animal up using a towel, prying his paws off the road.

Once he had crossed the road, he gently held the animal up to a tree trunk for it to latch onto, and patted its back reassuringly.

The man carefully grabbed the sloth with a white towel before taking it to safety, pictured

After it got a lift, the animal turned around to look at the man, left, and then extended its arm to him, right. Viewers thought it looked like a ‘thank you’ – but actually it’s a sign of protection

After it found the best branch to stick to, the animal turned around and extended its arm to the man, in a gesture many took to be a show of gratitude.

However Dr Rebecca Cliffe, founder and executive director of the Sloth Conservation Foundation, explained the sloth was trying to protect itself.

She said: ‘Lots of people think that when sloths put their arms out like this that they are waving or saying hello, or even asking for a hug. Of course, this isn’t true at all.

‘Sloths are a prey species with no effective way to defend themselves against predators.

‘When scared and feeling threatened, they will often put their arms out like this to make themselves appear larger. It is essentially a stress response that a lot of people misinterpret.’

However few viewers interpreted the signal correctly and took to Twitter to gush over the moment.

One posted: ‘Just one of the most beautiful thankyou’s I have ever seen! Thank you for sharing this remarkable clip! Beautiful beyond words.’

‘Actual tears,’ said one, while another wrote: ‘They are too pure for this world.’

‘I’ll be watching this video the rest of the day if anyone needs me,’ another said.

‘Thanks – what a lovely way to start the day, a wondrous creature and an act of kindness,’ said another.