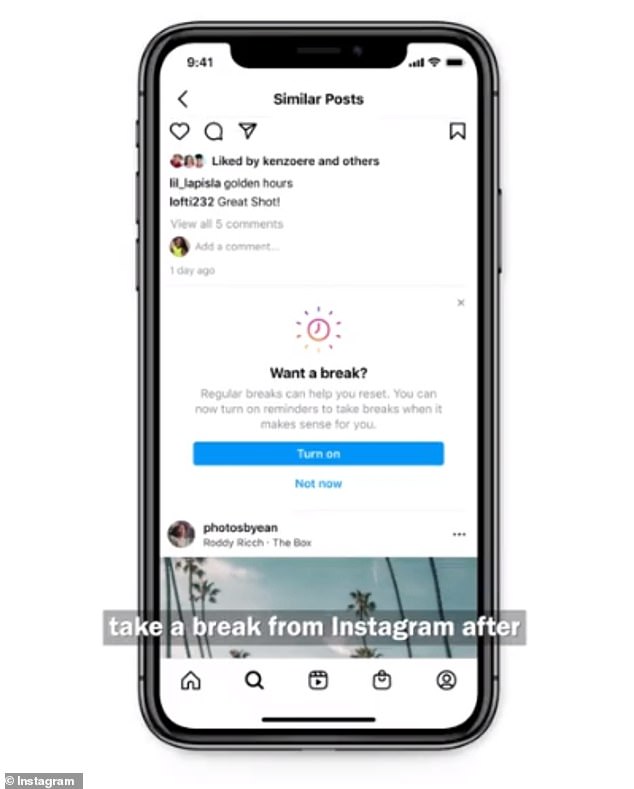 Time to take a break? Instagram is testing a new feature that gives users reminders when they’ve spent too long on the app


Instagram is testing a new feature that gives users reminders when they’ve spent too long on the app.

The feature, called Take a Break, lets users opt-in to receive prompts to stop using the photo-sharing app – every 10, 20 or 30 minutes.

Take a Break is rolling out as part of a test for a small sample of Instagram users, but all accounts could get it ‘in a month or two’.

If it does get a full rollout following user feedback, Take a Break could help cut ‘Instagram addiction’, which has been linked to harmful effects on mental health.

Whether it’s a breaking news article or a delicious recipe, there are often times that it’s useful to add links to your Stories on Instagram.

While the social media app previously had the option to add swipe-up links on Stories, this feature was limited to accounts with more than 10,000 followers.

Now, Instagram is ditching the swipe-up link feature in favour of a link sticker, which is available to all accounts.

‘What we’re starting to test this week on Instagram is one that I’m actually personally very excited about,’ he says in the video.

‘It’s called Take a Break and it does what you think it does. If you opt-in it encourages you to take a break from Instagram after you spend a certain amount of time on the app – 10, 20, 30 minutes.

‘You’re going to see this, if you’re in the test, over the coming days. If you don’t see it, you will hopefully get it in a month or two, once we get to a place where we’re comfortable enough launching it to everybody on Instagram. So keep an eye out.’

Take a Break comes in the form of a prompt displayed in users’ feeds, rather than a pop-up that takes over the entire screen.

The prompt says: ‘Want a break? Regular breaks can help you reset. You can now turn on reminders to take breaks when it makes sense for you.’

Users then have the chance to tap ‘Turn on’ or ‘Not now’. If they select ‘Turn on’, they can choose to get reminders to take a break for either 10, 20 or 30 minutes.

Take a Break comes in the form of a prompt displayed in users’ feeds (pictured), rather than a pop-up that takes over the entire screen

These suggestions include ‘take a few deep breaths’, ‘listen to your favourite song’ and ‘do something on your to-do list’.

Instagram, which is owned by social media giant Meta (formerly Facebook), has recently faced intense scrutiny over how it lures its users to spend excessive amounts of time on its apps.

App algorithms can identify the sort of content that users engage with the most, and then ramp out that particular type of content to keep them hooked.

Take a Break could help cut ‘Instagram addiction’, which has been linked to harmful effects on mental health (stock image)

The former employee said Facebook knew Instagram is dangerous for young people but did not want to act because ‘young users are the future of the platform and the earlier they get them the more likely they’ll get them hooked’.

Haugen also said the platform was unwilling to sacrifice ‘even a slither of profit’ for safety improvements.

Also last month, scientists at University of Technology Sydney revealed there are 46 harmful effects linked to the use of social media, and not all of them were mental health related.

There are almost 50 harmful effects linked to the use of social media, a 2021 study reveals – and they’re not just mental health-related.

For the study, the team reviewed more than 50 research articles published between 2003 and 2018.

In 2003, social media was still in its infancy and Facebook wouldn’t be established for another year. One of the early social networks, MySpace, was founded in 2003.

Among the 46 harmful effects of social media were found to be privacy violation, deception, panic, conflict with others and an increased appetite for taking financial risk.

Overall, issues of social media range from physical and mental health problems to negative impacts on job and academic performance, as well as security and privacy issues, according to the academics.