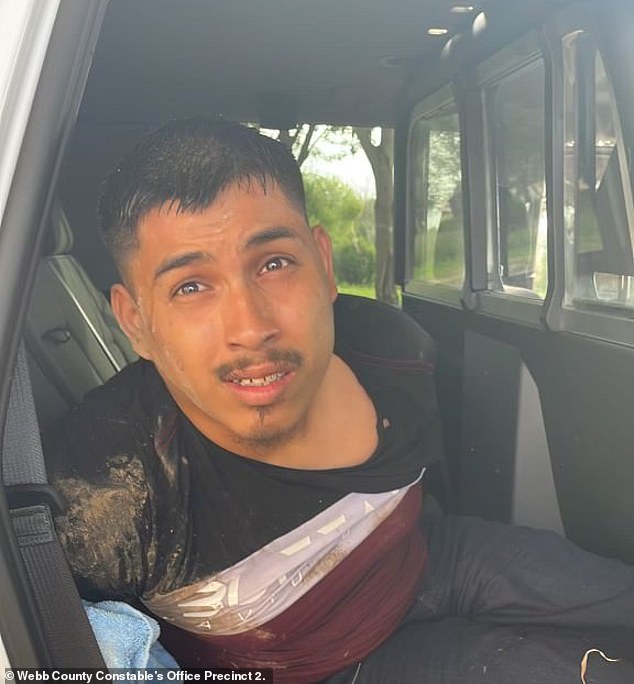 
An alleged cartel member involved in smuggling humans across the United States-Mexico border was dragged out of the Rio Grande after he attempted to swim to Mexico to escape Texas cops who were trying to arrest him.

José Francisco Paz-Ruiz, who officials identified as a member of the Northeast Cartel, was spotted by officers from the Webb County Constable’s Office Precinct 2 outside a home and boarding a pickup truck in Laredo on Tuesday, U.S. Customs and Border Protection said in statement.

Police attempted to stop the vehicle near an intersection to execute the warrant, but the driver, who was not identified, did not comply and drove off.

He subsequently led cops on a high speed chase as a Customs and Border Protection Air and Marine Operations aircraft joined the pursuit through downtown Laredo.

José Francisco Paz-Ruiz is escorted from the Rio Grande in El Paso, Texas, after he attempted to escape from Laredo police officers who were trying to arrest him on a warrant Tuesday. Paz-Ruiz, who has been identified as a member of the Northeast Cartel, tried to swim to Mexico along with another individual who remains at large

José Francisco Paz-Ruiz is escorted by officers with the Webb County Constable’s Office Precinct 2 in Laredo, Texas, moments after he was stopped from swimming to Mexico via the Rio Grande on Tuesday

The driver abandoned the vehicle under the Juárez-Lincoln International Bridge, where he and Paz-Ruiz jumped out and ran towards the Rio Grande as border agents and officers chased after them.

The driver was able to swim back to Mexico, but Paz-Ruiz was nabbed in the river and escorted back to the U.S. side of the Rio Grande.

The Webb County Constable’s Office Precinct 2 confirmed to DailyMail.com that he was wanted on two outstanding warrants for a hit-and-run accident and resisting arrest.

Border agents and cops pull José Francisco Paz-Ruiz from the Rio Grande on Tuesday moments after he attempted to swim back to Mexico and avoid being arrested by local authorities from Laredo, Texas

The precinct said that the man who was accompanying Paz-Ruiz and who swam back was not wanted for any previous crimes.

Paz-Ruiz is known to be part of a human smuggling organization linked to the Northeast Cartel.

The transnational criminal organization was created by former members of the notorious Zetas Cartel. The Zetas Cartel – which today is known as the Northeast Cartel – once was the Gulf Cartel’s armed wing before splitting away in 2010.

Juan Gerardo Treviño reportedly took over as leader of the Northeast Cartel after the DEA apprehended Juan Francisco Treviño in September 2016 in Houston.

The cartel operates in the state of Tamaulipas, and has been involved in multiple conflicts with its main rival, the Gulf Cartel, as well as the Sinaloa Cartel.

According to the DEA’s 2020 National Drug Threat Assessment, the cartel is one of the top nine criminal organizations from Mexico who traffic narcotics to the United States.