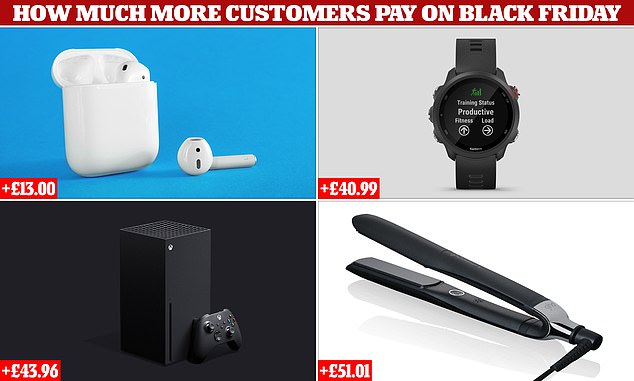 Shoppers warned to brace for a Black Friday price hike: Some popular items are found to be up to 35% more expensive on the day


Shoppers could be forking out significantly more for products this Black Friday than at other times during the year, new research claims.

Analysis of a basket of goods in the two months before Black Friday 2020, on the PriceSpy site, showed the same ten items cost a total of 18 per cent more on the day itself – a difference of £488.66.

The items included some of the most popular sold on the platform during Black Friday – now a huge event – last year such as headphones, coffee machines, laptops, mobiles and games consoles.

Overall, the research found that, generally, the best prices for items over the course of a year are almost exclusively outside of Black Friday.

Research into the 14 most popular categories on PriceSpy found that significant average price differences for the same products before and during Black Friday, often to the tune of hundreds of pounds per item.

Categories with the biggest average price increases include coffee machines with a difference of £63.54 when comparing the lowest price to Black Friday and mobiles with a gap of £49.33.

TVs also saw a difference of £31.66 and hair straighteners were on average £21.84 more expensive during the shopping holiday.

The biggest difference in price out of ten popular items bought on Black Friday last year was with the Sage Appliances Barista Express.

In the run-up to Black Friday this year, prices have also already steadily been increasing.

The average price of popular items has risen 2.25 per cent between the start of September and mid-October.

However, for those looking to make the most of deals this year, this price increase should slowly start to drop in mid-November, which is when the deals will start to kick in.

Last year, overall prices dropped 12 days before the event but the overall reduction was only 0.4 per cent while 30 per cent of the products in PriceSpy’s most popular categories cost more on Black Friday compared to 14 days earlier.

Ossie Bayram, PriceSpy UK country manager, said: ‘Black Friday is a time for many of us to hunt out deals, for Christmas shopping or simply to treat ourselves.

‘But while there are no doubt many to be had, shoppers should be wary that many of these so-called “deals” are actually more costly than elsewhere in the year.

‘With incomes seeing a squeeze due to inflation and energy price hikes as we approach Black Friday, it’s even more important not to get sucked into the hype and spend more than you need to.

‘Instead, we recommend for those looking shop, to make sure they take their time.

‘Research the items you’re looking for, create a wish list to stick to and look at price histories to find the best time to buy the products you want.’

PriceSpy examined thousands of prices across 42 products in 14 different categories from 1 September to 27 November 2021, through its price history tool.

The price drop estimate was taken from analysing total product prices via PriceSpy last year to show when prices will begin to fall.