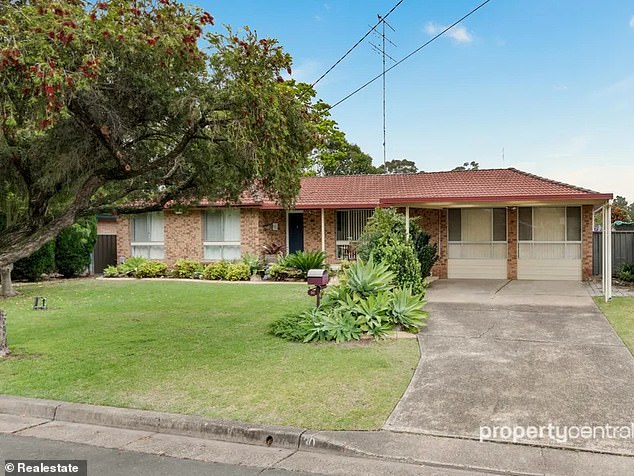 
A mother has forked out $1million on a four-bedroom Sydney home for her son ‘as a Christmas present’ – and nearly set a suburb record with her generous gift-giving.

But the cashed-up mother from the affluent upper-north shore suburb of Wahroonga pounced on the property and offered a seven-figure amount – much to the shock of the realtor.

A mother forked out a mammoth $1million on a four-bedroom home in Penrith for her son ‘as a Christmas present’, surpassing the asking price of between $899,000 and $969,000

‘It’s very rare to get seven figures in south Penrith, but the suburb is starting to go that way with a lot of interest locally. You mix that with an increase in Sydney buyers and it’s red hot at the moment,’ Mr Faico told realestate.com.au.

Mr Faico said the woman had been looking at property in western Sydney for several weeks.

The real estate agent added that the house’s location is in close proximity to Penrith CBD and is positioned in one of the suburb’s more desirable streets.

Property Central Penrith sales agent Cameron Faico said the mother from Wahroonga had been eyeing the property for several weeks (Pictured: The kitchen)

While the jaw-dropping $1,000,000 purchase may seem like a considerable amount, it was short of setting a new record price for the suburb.

‘It’s not a suburb record but for a four-bedroom, one-bathroom with no pool and no garage, it’s right up there,’ Mr Faico said.

The property settlement is expected to happen in January, which Mr Faico said makes for an excellent Christmas gift for the mother’s son.

The recently renovated 657 sqm home features an open plan design with a modern bathroom and kitchen, along with floating timber floorboards and a large backyard fitted with an undercover deck which serves as an entertainment area.

Mr Faico noted that interest had been rising for properties in Penrith from Sydneysiders because of the relatively cheap prices.

The agent said that despite the area being located an hour from the main area of Sydney, the region comes with a lot of benefits and individuals from inner-city areas looking to cash in on it.

‘It’s better bang for their buck. Compared to Sydney where you can buy a unit for $1million, you come out this way and you can buy a house with four bedrooms for that price,’ Mr Faico said.