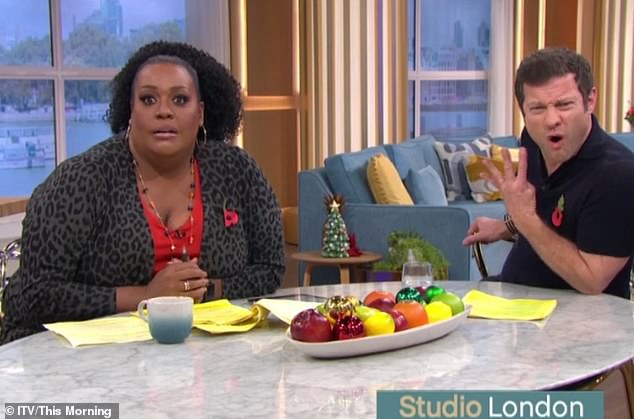 A dating coach who charges $10,000 (£7,000) to help clients find ‘the one’ justified her hefty price tag by claiming she’s ‘on-demand’ and ‘obsessed’ with her clients – and will even accompany them on dates.

Amy Nobile, a dating coach from New York, who claims to have an 80% success, appeared on This Morning today and told how she once made dating her ‘job’ and was meeting up to five people a day – adding that all of her ‘mistakes’ serve her now in her new career.

Since then, she went on to launch dating app Love, Amy, but viewers and presenter Alison Hammond were shocked to hear she charges a hefty $10,000 sum for her four month program.

‘Arguably the most important thing in life is love and so to really put yourself on a journey to empower yourself to find that special person in your life, it is a valuable journey.’

The dating coach revealed that she tells her clients there should be ‘no shenanigans’ until date four rule. Pictured, presenters Alison Hammond and Dermot O’Leary

She continued: ‘I am also a very unique coach. Usually when you hire professional coaches for around the same prices, you get a few hours a month of their time, you can email them. For me, I’m an on-demand coach. I only take a certain amount of clients and I’m obsessed with them – and we’re in it.

If a client needs to call me from a bathroom on a date, he or she can call me from the bathroom during a date. I will answer and really be there every step of the way.’

During the segment of the show, Amy explained how her dating app was the ‘most unexpected career twist of my life.’

‘I love it so much,’ she said. ‘I am a serial entrepreneur and I’ve written four books all designed to empower women.

‘And in the course of writing my last book, which is a book about reinventing yourself, I realized very poignantly that I had to leave my marriage of 20 years – we were together for 26 – with two beautiful teenagers. It was the most difficult decision of my life.’

‘I was tossed into this single dating world for the first time in over two decades and it was really scary. I tried to date old school – everyone says they’re going to set you up, they don’t.

‘I was going to coffee shops and everyone was looking at their phones and I started to realize online dating apps are really the right way to meet people but they’re really intimidating.’

Amy Nobile, a dating coach from New York, who claims to have an 80% success rate and says she can find you ‘the one,’ appeared on This Morning today

Amy told how she found the love of her life three-and-a-half years ago on Bumble and they’ve just got engaged. Pictured, together

‘I decided I was going to crack this code. I don’t recommend it, but I made dating my job. On some days I was dating three, four or five people a day. All of my mistakes serve me now in my new career as a dating coach.

She continued: ‘And I found the love of my life three-and-a-half years ago on Bumble and we just got engaged. So I decided to launch Love, Amy just to help other people crack this code, too.’

Dermot went on to ask the dating coach how her app works.

‘So I’m not a matchmaker,’ she explained. ‘I sort of leverage the most valuable thing we have right now – the dating apps are a gift. They are however, intimidating. Lots of people dip their toe into dating apps and feel really uncomfortable with it.

‘My program is four months and it’s designed not only to present you as the best possible version of yourself, not how you think others want to see you, but how you really are with all of your amazing gifts.

‘It also puts you in the driving seat and flips the script on dating so you’re not hoping to be chosen. You’re really empowered to ask the right questions on a date, see if you’re really aligned with someone and actually have fun in the process. That can be a tough journey for a lot of people but I really just try to hold their hand through it.

Just like if you were training for a marathon, you’d hire a coach to give you all the tool you need, and that’s sort of how I present myself in the dating world.’

Alison went on to mention how Amy had even accompanied people on a first date to watch how they interact.

‘I’ve been on several dates incognito within ear shot from the bar,’ said Amy . ‘I can read body language and coach my clients.’

She went on to spill the beans and offered a few dating tips to viewers who may not have $10,000 going spare.

‘The first tip that I have is positive energy,’ explained Amy. ‘The dating apps are amazing but people really hate them. It feels uncomfortable to present yourself in this way, but if you have a really positive attitude, just like if you’re changing careers and want to find a new job, you’d go off on this journey and have the best attitude – this is no different.

She continued: ‘Also, when you’re putting yourself out there on a dating app, really get specific about who you are and what you want.

I think so often people are hoping to be chosen and want everyone to like them, but we’re actually just as defined by the people who don’t like us, by the ones who do.’

Get very specific. If you’re looking for a relationship and want kids, go ahead and say that. If you have a wicked sense of humor, what’s an example of that? Really showcase who you are.’

Adding that rejection is not a bad thing, Amy added: ‘Rejection if just a redirection. When people tell you who they are or show you who they are, it’s good. It kind of clears the way for us to actually find and meet our person.

We’re emotional human beings so of course it can feel really daunting. It’s a bummer if someone doesn’t turn up to meet you, but it’s a gift. They’re showing you they’re no at the same place as you and they’re not vibrating at the same level. That’s totally fine!’

Dermot concluded by questioning Amy on her ‘no shenanigans’ until date four rule.

‘I have my advice and my clients can choose to do what they want to do,’ said Amy. ‘I believe it’s really important to have an emotional connection before you have a physical one.

‘I say date one, two, three, you can kiss and make out. After date three I don’t really care what you do, but I don’t want my clients to fall into a pattern of going too fast too soon.’