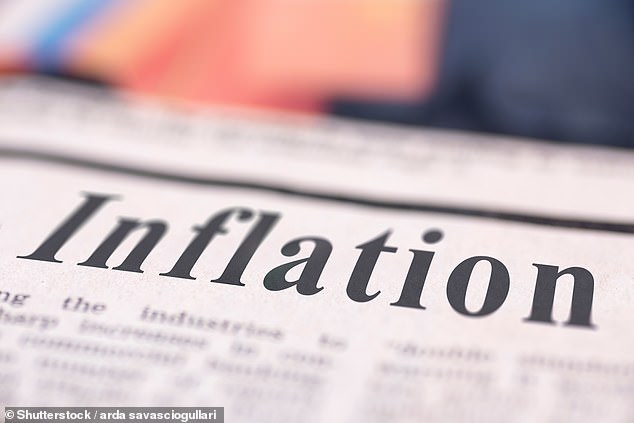 
The Bank of England will be given a fresh headache over interest rates next week as the cost of living spirals.

Official figures published on Wednesday are expected to show inflation jumped from 3.1 per cent in September towards 4 per cent in October.

The City ‘consensus’ is inflation will reach 3.8 per cent but Nomura economist George Buckley warns it could hit 4.1 per cent, more than double the 2 per cent target and pile pressure on the Bank to raise rates to stop prices spiralling out of control.

In black and white: Official figures published on Wednesday are expected to show inflation jumped from 3.1 per cent in September towards 4 per cent in October

Figures this week showed US inflation hit 6.2 per cent last month, the highest since 1990 when George Bush Snr was in the White House.

Interest rates in the UK were cut to an all-time low of 0.1 per cent during the pandemic.

The Bank surprised markets last week when it left them unchanged, having been tipped to raise rates to 0.25 per cent. It is still expected to be the first major central bank to raise rates in the wake of the pandemic, according to a poll by Reuters.

The move could come just before Christmas with the first December rate hike since 1994.

Simon French at Panmure Gordon said the decision would depend on how strong the jobs market data is now furlough has ended. He said next week’s jobs report was ‘likely to be strong’ which makes an interest rate rise in December ‘a better bet’ than it was this month.

Buckley warned that ‘a perfect storm is brewing for UK inflation’ given the rise in energy bills and the widespread price increases.