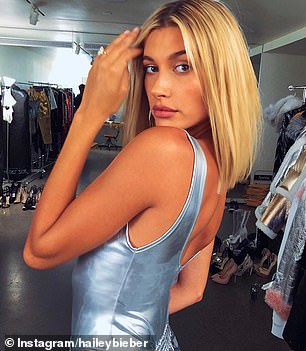 From wearing skinny jeans, to side partings and using the laughing emoji – Gen Z have dubbed just about every millennial-loved trend as cringey and outdated.

The term ‘cheugy’ means ‘basic’ and ‘opposite of trendy’ and it seems that having blonde hair now falls under the umbrella of trends under scrutiny from the fashionable age group.

Celebrities including Hailey Bieber, Gigi Hadid and Florence Pugh have all recently ditched their blonde locks for a darker look – which stylists are calling ‘expensive brunette’.

Celebrities have ditched their blonde locks for a darker look – which stylists are calling ‘expensive brunette’.  Hailey Bieber revealed her transformation from from beachy blonde to chocolate brunette on Instagram last month

Dove Cameron has been blonde since her on-screen debut in 2012 (left in September) but has since opted for a chic brunette look. Right, Dove this month in Los Angeles

Mariano Ruiz, founder of Shewolf, claimed to Femail that being fully blonde is outdated, adding fashionistas are opting for ‘more natural-neutral colours or fashionable and vibrant colours’.

‘The traditional blonde look, super bleached, is gone. It has it’s time and back then was the dream of many. The word cheugy is correct, super blonde hair goes through a very strong process where bleach is needed in order to remove any natural pigment from your hair.

‘Even though there are several bond strength products in the market, over time, blonde hair has the risk of getting tired, breakage and over processed.

‘Gen Z is more about being natural, embracing the hair texture, playing with it and making life much easier’.

Last month actress Florence Pugh, left at BFI film festival in London in 2014, swapped her usual long blonde locks for a cropped brunette style. It’s not the first time Florence has gone brunette, with the star switching up her look for a short while last year (right)

Margot Robbie, pictured left in 2018, has gradually grown out her signature blonde locks and is donning her natural brunette tresses. Pictured right, the actress in Los Angeles in August this year

The hairstylist even claimed that blonde hair can be ‘boring’, revealing that increasing numbers of his clients are embracing their natural colour.

‘Every day at the salon more and more people are asking me to go more natural, to embrace their natural colour, he said.

‘What I see with this change is a brand new woman re-inventing herself right in front of me, someone full of confidence and escaping what she believed was necessary to be accepted.’

He says women are tired of high maintenance and over-processed hair, arguing that ‘everything is changing to a more natural, relaxed and easy style’.

‘Being blonde seems to be the ‘hair goal’ but the fact is that everyone looks like everyone else’, he said. ‘We are bored of seeing the same over and over.’

Lily James is pictured left rocking blonde locks as she attended the UK Premiere of ‘Yesterday’ before switching to a sleek lighter brown bob in December that year. Pictured right, Lily at the British Independent Film Awards 2019

While model Cara Delevingne has switched up her hair a lot over the years, she usually has some lighter colours running through her hair. Left, Cara during last year’s Paris Fashion Week. But she recently opted for a dark brunette look (right, ahead of the Met Gala this year)

Elizabeth Olsen, pictured left in 2018, ditched her ombre blonde locks for a darker brunette look. Right, the actress in Los Angeles in May

However Jason Collier, Brand Educator for the UK’s No1 Blonding brand Jerome Russell, disagrees – arguing it is certain techniques such as heavy highlights that are no longer stylish.

‘Being blonde is still fashionable,’ he said. ‘It’s more the technique that’s becoming unfashionable, such as heavy highlights and balayage, as they take a lot of upkeep and people are swaying to more low maintenance styles.’

He agrees that natural looks are becoming more fashionable, and that clients are ‘feeling more confident and embracing their true styles and hair colours’ –  but hasn’t seen an influx in brunette customers.

‘For my clients, there has actually been an increase in those wanting blonde’, he said.

Since leaving Made In Chelsea, Francesca Hull (left in 2011) has also swapped her signature blonde locks for a more natural brunette look (right)

‘This is partly due to people growing out old hairstyles during lockdown and now needing a top up, but also those who have had a hairstyle for a long time and now want a completely new look.’

As for the reason that so many A-listers are choosing the look, he says that now brunette tresses can look equally as ‘expensive’ and ‘designed’ as icy blondes ‘it makes sense that many celebrities are interested in the deeper tones.’

Jason agreed: ‘Naturally as we go into the winter months we tend to opt for darker richer looks… but after the last few lockdowns, some people are simply looking for a more low maintenance style.’