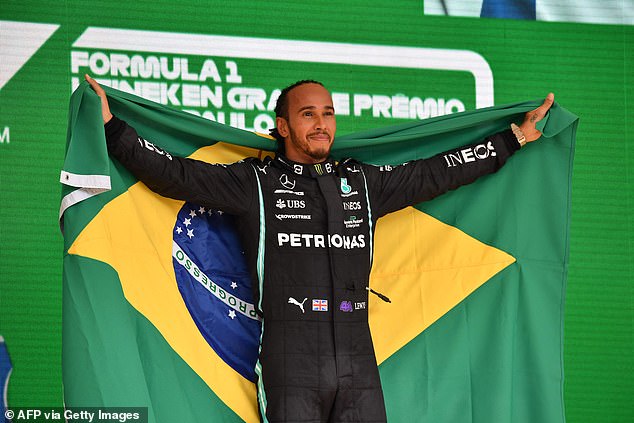 The 2021 F1 season is turning into one of the best ever, with genuine rivalries, an incredible title battle and some of the most impressive driving you could imagine.

Lewis Hamilton and Max Verstappen are going wheel-to-wheel, quite literally, at every circuit and last weekend’s Sao Paulo race saw the Brit come out on top, despite being penalised 25 grid places over the course of two days.

Here, Sportsmail takes a look at five things we learned from a Brazilian Grand Prix that will live very long in the memory…

Fans turned out in their thousands to watch the brilliant race, which saw Hamilton impress

Lewis Hamilton really is the GOAT

Let’s start with the big one. Hell hath no fury like a Lewis Hamilton scorned. The seven-time world champion was dealt a rough hand in Brazil at the weekend, but still he managed to turn it around to secure his 101st race win, and perhaps more importantly, close the gap on Red Bull rival Verstappen.

After stewards found a ‘technical infringement’ on the rear wing of Hamilton’s car in the wake of Friday’s qualifying, the Brit was disqualified and forced to the back of the grid for Saturday’s sprint race.

He then used the 100km race to fly up the order to fifth, before he was again handed a penalty – this time five places – when Mercedes took a new engine on his car.

The Brit came from 10th to win, overtaking his rival Max Verstappen in the latter stages

Therefore, Hamilton was down in 10th for the start of the race, but went on to produce perhaps the drive of his life to win, overcoming various difficulties along the way. There were claims he was forced off the track by Versappen on lap 48 (more on that later), but not only did he manage to overtake his rival, but he went on to secure victory by an incredible 10 seconds.

There has been lots of talk over whether Hamilton really is the best F1 driver of all-time, but Sunday’s drive went a long way to proving that he really is. Yes, he has a brilliant car, but it takes more than that to be a world champion.

It remains to be seen whether he will secure a record eighth title this season, but it’s clear that he has the talent to take Verstappen all the way, with just three races to go.

Hamilton waves a Brazil flag on Sunday; he is cementing his place as the greatest of all-time

Sticking with Mercedes, it was a topsy-turvy weekend for team boss Toto Wolff, who had to deal with more ups and downs than perhaps he would have wanted.

There was the obvious fury at the F1 hierarchy for Hamilton’s disqualification, which came after Verstappen was seen touching the rear wing of his rival’s car. While there is no suggestion the Dutchman tampered with the Mercedes, it was a bizarre scenario that left both team bosses with plenty to say.

On the grid before Sunday’s race, Wolff told Sky’s Martin Brundle that the FIA could ‘cut [the rear wing] in 1000 pieces’ after confirming that they hadn’t got it back after the investigation, and he was also heard telling Hamilton on team radio ‘Brilliant job Lewis, f*** them all’ after Saturday’s sprint race.

Clearly, he and the FIA aren’t on the best of terms at the moment – perhaps not helped by the fact that Verstappen still leads the drivers’ standings – and there was one moment in particular at the weekend that showed his anger in full force.

Well aware there was a world-feed camera trained in on him after Hamilton crossed the line to win, Wolff made his feelings very clear, pumping his fists and pointing right down the lens. In truth, he looked furious.

You might have expected the team boss to play it down when he was inevitably asked about it post-race, but no… Wolff was happy to explain: ‘That was just a friendly hello at the race director.’

We certainly wouldn’t want to be Michael Masi right now.

Advantage Ferrari in the midfield battle

Away from the top-two battle between Mercedes and Red Bull, there is an almighty fight going on for third place in the constructors’ championship.

Ferrari are recovering after a 2020 to forget, and there is hope that in 2022 they will join the teams fighting for the world championship. Right now, though, the best they can hope for is third – and they’re on track.

That is mostly down to the incredible drives being put in week-on-week by Charles Leclerc and Carlos Sainz, who are both wringing every drop out of the car and maximising the points.

Of course, this weekend they were helped by McLaren having a howler. Lando Norris had the race-start from hell when he collided with Sainz seconds after lights out, before eventually recovering from 20th to finish 10th – just in the points.

Daniel Ricciardo, though, was forced to retire with a worrying power unit problem, while the Ferrari pair coasted through in fifth and sixth to scoop 18 points.

That takes them 31.5 points ahead of their rivals McLaren with three races to go, and if they can see it out it will be a miraculous recovery from their sixth-placed finish in 2020.

Lando Norris had a nightmare start, suffering a puncture just seconds after lights out

The main talking point of the race – bar Hamilton’s brilliant drive – came at turn four of lap 48, when the Brit had finally got close enough to take on Verstappen, with the help of DRS at the end of the straight.

Hamilton got round the outside of his Red Bull rival and seemed to take the lead, only for both drivers to go wide, with Verstappen then reclaiming his position. It sparked fury from Mercedes, who claimed their man was crowded out, while Red Bull were straight on the radio to the FIA to insist it was a ‘let them race’ scenario.

On Sky commentary, both Martin Brundle and David Croft erred on Hamilton’s side and believed that Verstappen could well have picked up a five-second penalty for his part in the melee – but in reality, the stewards didn’t even investigate.

After taking a brief look, the message was relayed by race director Michael Masi that no investigation was needed, but it sets a dangerous precedent for the stewards to not even take a look at the incident.

Of course, it may well have been decided that no punishments were needed, but after a high-speed incident involving the sport’s two biggest drivers, in which many believed one was in the wrong, it would have made sense for them to have at least reviewed it with an official investigation.

Stewards decided no investigation was needed, despite many thinking Verstappen was wrong

Of the 2021 rookies, Yuki Tsunoda is in far and away the best car, with Haas pair Mick Schumacher and Nikita Mazepin regularly battling it out for 19th and 20th position.

That said, he is still struggling and could only put his AlphaTauri 15th in Brazil. Overall this season, he has just 20 points, only four more than George Russell in a much better car.

Of course, the main barometer of success is to measure your performance against your team-mate, and that is where it becomes clear that Tsunoda must improve if he is to make his F1 career a success.

The brilliant Pierre Gasly is in the form of his life and has already secured 92 points this season, ahead of both the Alpines and both Aston Martins.

He had a point to prove after being demoted from the Red Bull, and is making waves week in, week out in the world of F1. Of course, Tsunoda needs time and is a very promising young driver, but so far he’s looked out of his depth at the top level.

Yuki Tsunoda had another weekend to forget, suffering damage after a clumsy move on Stroll

The 2021 rookie (pictured) is in an impressive car, but is being outdriven by his team-mate