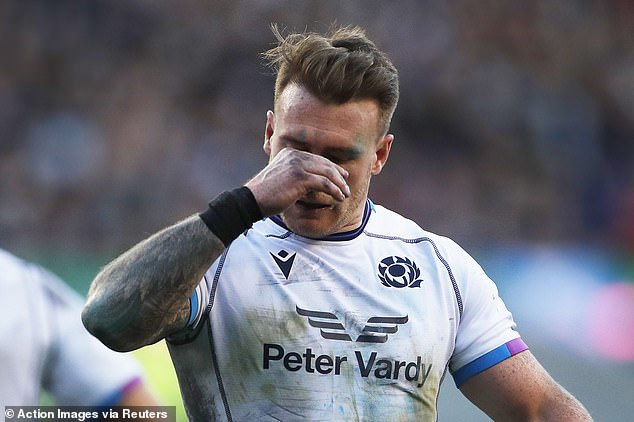 
Scotland captain Stuart Hogg’s historic double against South Africa was no consolation as he bemoaned the self-destructive errors that led to a 30-15 defeat.

Scotland led the world champions 10-8 at half-time and Hogg gave them hope with his second try, which took him level with Tony Stanger and Ian Smith on top of Scotland’s all-time try-scorers list.

But Bok winger Makazole Mapimpi managed two tries himself as South Africa kicked to success with a 15-9 penalty count in their favour.

Finn Russell missed several kicks he might have done better with, and three penalties in the final 15 minutes took the Springboks out of sight.

‘I’m bitterly disappointed with the result,’ Hogg said. ‘Especially in the first half, we felt we were in control of the game.

‘The first 20 minutes we defended like our lives depended on it and kept them out and went down the other end of the field and scored three points. That was huge for us.

‘Unfortunately, the second half didn’t quite go to plan. The boys are absolutely devastated about the result. The second half was far from where we needed to be.

‘You could say the Springboks were dominant, I would probably disagree. I would say we shot ourselves in the foot at times.’