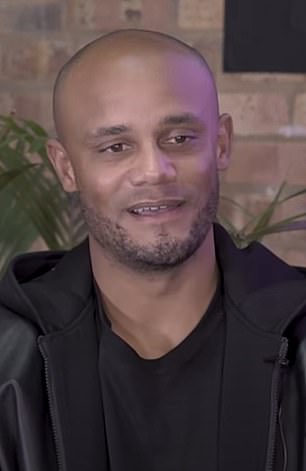 ‘I was fighting with 16-year-old kids – they need that grit’: Vincent Kompany opens up on ‘mad’ life as a player-coach at Anderlecht – and outlines his plans to become a top manager


Vincent Kompany has opened up about his ‘mad’ time as player-manager of Anderlecht before he took the coaching position full time.

Having left Manchester City as a club legend, the Belgian was tasked with righting the ship at his boyhood club in 2019.

He found the juggling of responsibilities a struggle and after a dire start to the season concentrated on just playing until he retired at the end of the season to take the reins last year.

Kompany is shaping the young careers of stars of the future, like Jeremy Doku (right)

‘Being a player-coach is mad’, he told Rio Ferdinand’s podcast FIVE. ‘It is definitely worth the experience once.

‘What I did have was a fantastic relationship with the group. When you can still be amongst them on the pitch… I would never say it at City but there (Anderlecht) I was the best, and I was also able to bring across a bit of the culture that I want to bring in, like competing for everything in training, fighting with kids who are like 16!

‘We did this little one-on-one drill with small goals just to increase that competitiveness and stuff and I’m there, 34-year-old international, fighting with kids that are 16. One of them was (Jeremy) Doku, these kind of guys.’

Doku has emerged as one of the most exciting young wingers in Europe and showed flashes of what he is capable of for Belgium at Euro 2020.

He is one of the many promising academy products in the squad but Kompany took it upon himself to build a culture where talent is not enough without determination and hard work.

He added: ‘In Anderlecht’s case, all the kids coming through have got a very, very good technical level but that grit is what gets you through a career as well.

‘Any rule that exists, I would try and be on the edge just for them to understand what it takes to be a professional footballer.’

Kompany has steered Anderlecht to eighth in the Belgium Pro League so far this season as the club continue to rebuild following their recent financial struggles.

And while he is happy at the club for now, the ex-centre-back does not shy away from his grand ambitions.

‘With the normal rate of development and hard work I am just going to try and go as high as I can,’ he said. ‘Being a coach is also a lot about decision-making and having the right opportunity at the right time.

‘I can say whatever I want to say about where I want to end up but we’ll see. Where I am now, I’m happy, I’m not going to pitch myself higher than that. One thing is for sure, I will work hard.

‘Whatever I lack in talent – and I think I have some talent – I’m going to make up for it in effort.’