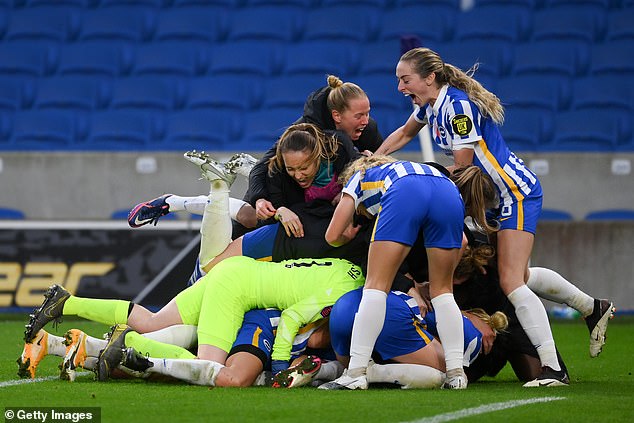 WSL ROUND-UP: Brighton leave it late to defeat bottom club Leicester, Everton earn their first point under Jean-Luc Vasseur… and Anita Asante is the hero in the Second City derby


Brighton left it late to beat bottom-of-the-table Leicester at the Amex to go above Tottenham into third.

Substitute Maisie Symonds curled a free-kick over goalkeeper Kirstie Levell in injury time to give the Seagulls a 1-0 win.

The Foxes are pointless from seven games despite another valiant effort from Jonathan Morgan’s side.

Everton picked up their first point under new manager Jean-Luc Vasseur as they drew 1-1 with Manchester United.

Ella Toone put the Red Devils ahead in the first half with her third goal of the season, but Simone Magill levelled in the 76th minute when she capitalised on a mix-up between goalkeeper Mary Earps and defender Maria Thorisdottir to bundle the ball over the line.

Anita Asante was the match-winner for Aston Villa in the Second City derby as they beat Birmingham 1-0 at St Andrew’s.

The defender headed the visitors in front from a corner in the 25th minute to give manager Carla Ward a well-earned victory against her former club.

Reading came from two goals down to claim a point against West Ham. On-loan Arsenal winger Lisa Evans had headed the Hammers into the lead in the 19th minute before Grace Fisk made it 2-0 at half-time.

But an Abbey-Leigh Stringer own goal in the 70th minute kickstarted the comeback, which was completed when Emma Harries levelled in the second minute of injury time.