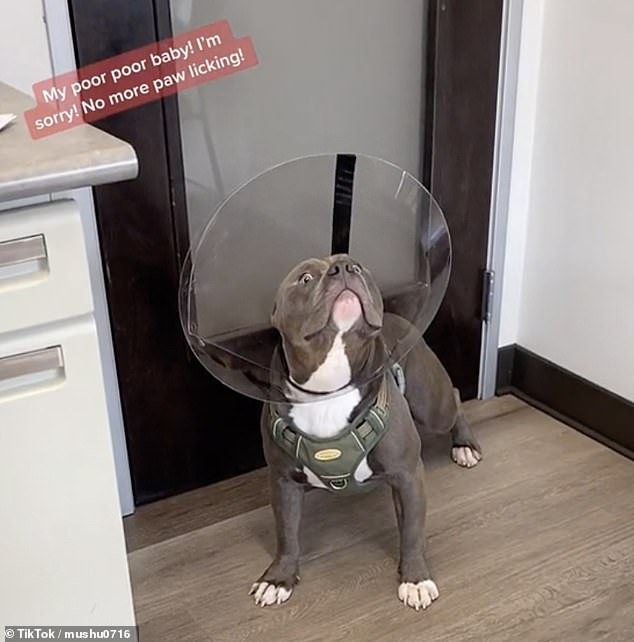 
An American bulldog froze like a statue and stared helplessly at the vet after he was made to wear the ‘cone of shame’.

Footage shows the nervous canine named Mushu run towards the corner of the room as the vet tries to place the medical cone around his neck at a clinic in Texas.

However the dog soon realises resistance is futile and instead shows his apprehension as the vet fits the cone, which is often used to stop animals from biting, licking or aggravating any injuries, on him.

Within seconds, the dog’s body freezes and he stares at the clear cone placed around his neck as his owner reassuringly tells him: ‘It’s OK Mushu.’

During the clip, which was uploaded by the Tik Tok user @mushu0716, the canine notices the large clear cone heading towards his head and makes a dash for the door as the vet says: ‘It’s OK buddy. You’re OK.’

The canine then stops and looks nervously at the vet as she reassuringly pats his head and carefully places the medical cone around his neck.

Mushu immediately freezes in his tracks and adopts a shocked expression as another voice says: ‘Would you come here baby? Look how stiff he is.’

The dog remains motionless and keeps his eyes wide open as the vet says: ‘You’ll get used to it.’

In an attempt to get the canine to move, the vet offers Mushu a biscuit but the baffled dog refuses to take a bite.

The comical clip, which has amassed more than 16 million views on Tik Tok, has received an array of responses from social media users.

One user wrote: ‘Legend has it he never moved from that spot ever again.’

While another person added: ‘So in shock that he didn’t even want the treat.’

Another person commented: ‘He’s so confused.’

Elsewhere another person added:  ‘And he never blinked again.’