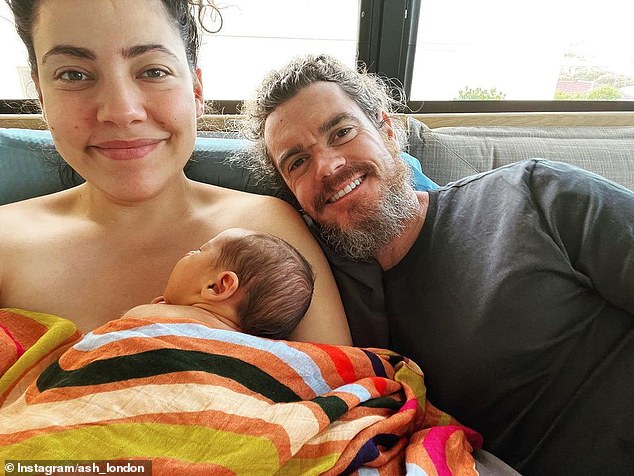 
Former Hit Network presenter Ash London has spoken candidly about why she left the radio industry.

The mother of one, 35, spoke about her career path on the It’s All Her podcast with former Neighbours actress Jordy Lucas.

‘I was at SCA, Southern Cross Austereo,’ recalled Ash. ‘I was at the Hit Network at Triple M. I was doing the night show with Angus [O’ Loughlin] for two years.’

Life change: Former Hit Network presenter Ash London (left) has revealed why she left her radio career behind and how she came to meet her now husband Adrian Brine (right)

Ash, who now hosts her own popular podcast, told Jordy it was then she decided she wanted a change in her life.

‘I wanted something different and I was over it and had been dumped and was just generally unhappy and about to turn 30,’ she said.

‘So I quit, and I went travelling, and I just lived my best life. Spent a couple of months at a desert island, eight hours from the nearest city in the Philippines.’

Ash explained she’d travelled to Asia and Europe then ‘really wanted’ to move to  London because she had lived there five years earlier.

She was in talks with the BBC and other media companies for a job, but wasn’t able to acquire a working visa.

She then returned to Australia and landed a gig at the Hit Network, and met her now-husband Adrian Brine at the ARIA Awards a month later.

‘I thought he was old because people talked about him as this “mentor guy” like a boss,’ Ash said.

Fate: Ash met her now-husband Adrian Brine (left) at the ARIA Awards a month after landing a job at the Hit Network following an extended overseas holiday

She caught sight of Adrian at the ceremony and recalled how shocked she was that he was a similar age to her and begged her colleagues to introduce them.

‘So we got introduced and I knew I was going to marry him,’ Ash added.

She even texted her friends to say she had ‘just met the guy I’m going to marry’.

The couple ended up tying the knot in early 2018, and welcomed a son named Buddy in September this year.

Growing family: The couple ended up tying the knot in early 2018, and welcomed a son named Buddy in September this year