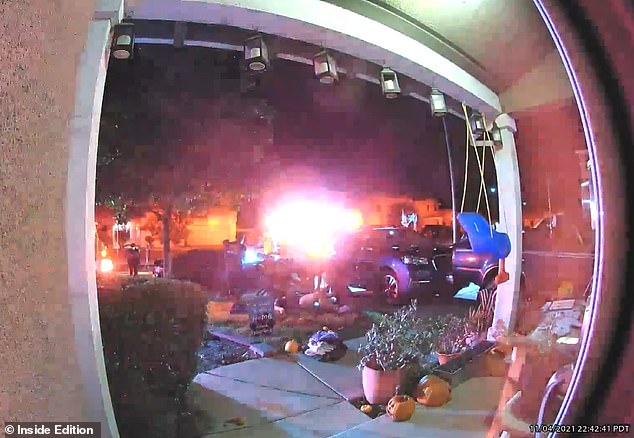 A Ring doorbell camera caught the moment a pregnant California woman gave birth on her front lawn, a development she said was ‘totally not in my birth plan.’

Emily Johnson, 31, can be seen – and heard – pushing her son into the waiting hands of her mother as her husband looked on in the grass outside their Vacaville home Thursday in the astonishing footage.

‘I was going to accept those wonderful pain medicines at the hospital,’ Emily told CNN. ‘Having a natural childbirth was not in my birth plan. But given how fast the labor progressed, we knew I was not getting there.’

Johnson’s mother, Kristy Sparks, can be heard encouraging Emily to push as the lights of emergency service vehicles flash in the background. She shouts ‘we’ve got a head!’ to an EMT from the Vacaville Fire Department who runs up to the family laid out on the grass.

Emily Johnson, 31, pushed her new baby into her mother’s waiting arms on her front lawn last Thursday when she just couldn’t make it to the hospital – and the family’s Ring doorbell camera captured the whole birth!

At seven pounds and 11 ounces, Thomas (pictured) was born at 10:42pm – evidenced by the timestamp on the Ring camera footage

‘It was surreal,’ Sparks told Big 105.9 of the outdoor delivery.

‘I could see lights from the fire truck and the next thing I knew I had the baby’s head right against my hand,’ she said.

When her baby, Thomas, utters his first cries, Emily’s wails of pain turn to peals of laughter:

‘Hey Thomas! How you doin’, bud?’ she exclaims, joyful and relieved. ‘Hey Tommy!’

At seven pounds and 11 ounces, the newest resident of Vacaville was born at 10:42 p.m. – evidenced by the timestamp on the Ring camera footage.

Emily told Inside Edition that she and her husband Michael were on their way to Vacaville’s hospital, which is just five minutes away from the Johnson’s house, when she realized she ‘couldn’t get in the car.’

‘I was like, the grass is a little bit damp, and I was like, I’m feeling nauseous, I’m going to go and lay down in the grass,’ she said.

Ultimately, she didn’t get up from the grass until her second son came into the world – she joked that she was like a ‘cow giving birth in a field.’

As her husband ran back and forth from the house to the makeshift delivery room out front, he ‘realized… that the Ring camera had the little blue light on it and it was recording all of this,’ Emily said.

Emily told Inside Edition that she and her husband Michael were on their way to Vacaville’s hospital, which is just five minutes away from their house, when she realized she ‘couldn’t get in the car’

The mother-of-two also told KCRA that she was ‘thankful [she] wasn’t facing in the other direction’ – otherwise, she said, she ‘wouldn’t be able to show that footage with anybody.’

When the little family finally did get to the hospital, they relived the bizarre birth on one of their phones – and the nursing staff who had bemusedly cleaned grass clippings and dirt off the new mother’s knees piled in to watch with them.

‘Once my husband sent [the video] to one of our local news stations, it went viral from there,’ Emily told DailyMail.com

‘Friends from many states have reached out, and friends of friends from Canada and Mexico have also seen it. With all of the pain, trauma, and negativity on the news lately, I’m glad that a video with me groaning like a farm animal welcoming my second baby can bring joy and laughter to others.’

‘This is something that is going to be around forever and something we can share to embarrass him for years to come,’ Michael told CNN.

Emily has settled back in at home and is ‘recovering great,’ the family told news outlets, and the Johnson’s three-year-old, Blake, has spent plenty of quality time with his new baby brother.

Next time, Emily said, the couple may just ‘tailgate in the parking lot at the hospital so we’re better prepared.’

DailyMail.com reached out to the family and the Vacaville Fire Department for comment.