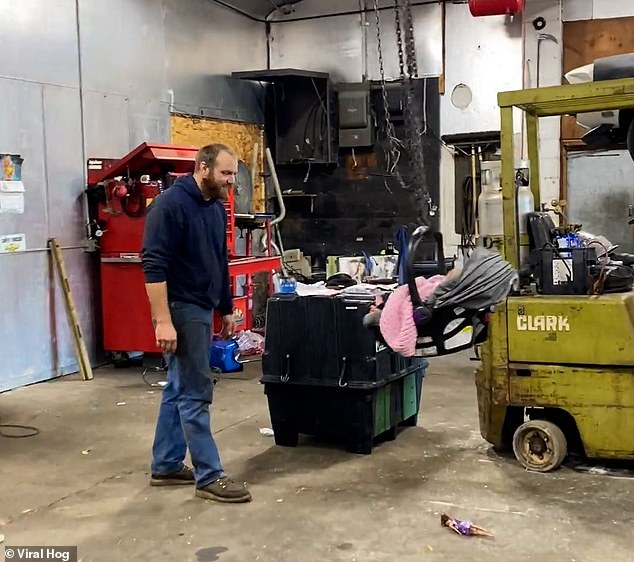 Who says men can’t multi-task? Garage owner and father-of-four turns engine hoist into a swing for his baby daughter in adorable footage


This is the heartwarming moment a father created a swing for his baby daughter using an engine hoist in order to keep her occupied while he was at work.

The infant stares at her surroundings as the father-of-four, who owns Busted Nut Garage, smiles at his daughter.

As the businessman’s wife Carrie watches the pair inside the garage, Mr Vanderpoel says: ‘My latest Busted Nut right there!’

He then continues to push his daughter on the swing as Andy makes a series of babbling noises.

Mr Vanderpoel, who was able to create the swing by attaching his child’s car seat to an engine hoist, wrote on social media: ‘Have to improvise when you have four daughters and running a business.’

He and his wife also have daughters Austin, Bryce and Cole.

His wife told Viral Hog: ‘My husband and I own a mechanic garage called Busted Nut Garage.

‘One day I had been in the office doing paperwork, then I walked out into the garage to my husband swinging my eight-month-old baby in her car seat from the cherry picker! She loved it!’

One user wrote: ‘So adorable, thanks for sharing.’

While another person added: ‘Dedicated dad, what a great human. Loves his child so much.’

Meanwhile another viewer commented: ‘Beautiful. She’s going to be an expert on cars when she grows up.’

And one person wrote: ‘That’s one happy baby.’