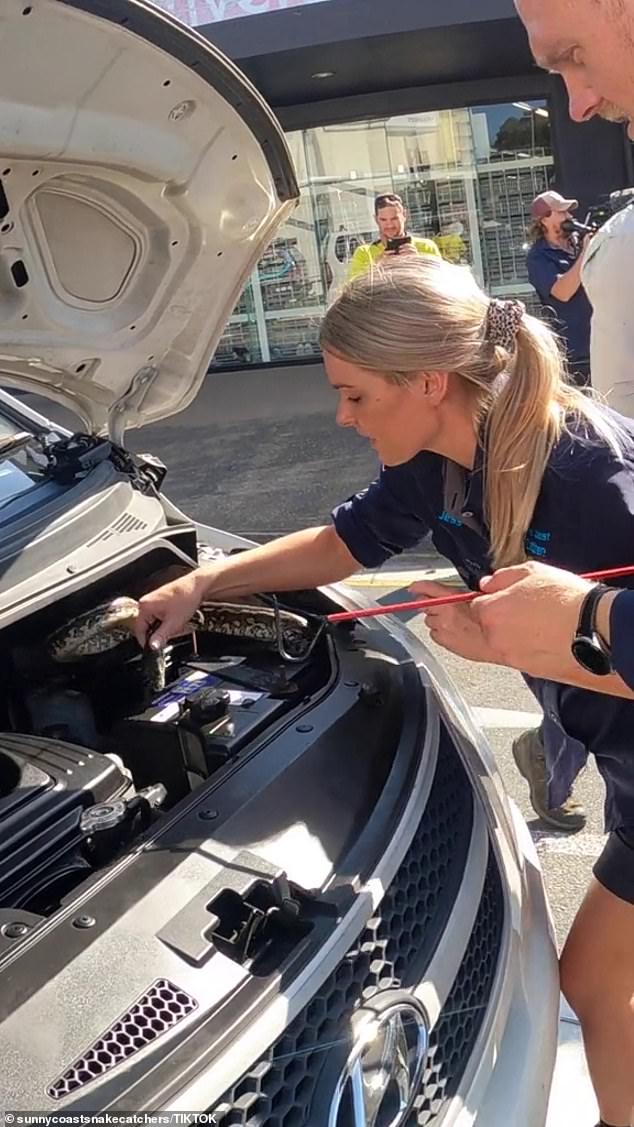 Driver gets the shock of his life when a snake crosses the road at a busy intersection and slithers inside his car engine: ‘The most Aussie thing ever’


This is the moment a huge snake is pulled from the engine of a car after the reptile climbed inside when the vehicle stopped at traffic lights.

Jess Schmidt and Stuart Mackenzie travelled to a call-out at the ‘busiest intersection on the Sunshine Coast’ in Queensland to extract the reptile.

‘Somebody has stopped at some traffic lights on a main road and a snake has been crossing the road and then just gone up inside his engine bay,’ Ms Schmidt explains to her colleague.

After finding the vehicle stopped in the middle of the road – hazard lights flashing and the bonnet popped – the pair tried to find where the snake had gone.

‘I can’t see him at the moment… he’s gone down into the wheel arch,’ Mr Mackenzie said scratching his head.

Ms Schmidt gets down on the asphalt to get a view behind the front tyre, while Mr Mackenzie looks on bent over the engine.

‘Oh I can see some scales, I’ve got him here,’ Ms Schmidt said.

Ms Schmidt then reaches in and grabs what appears to be a large python by the head and pulls it from the engine.

‘Hooley dooley. There you go mate,’ she said, while placing the reptile safely into a bag.

‘I would have just given the car to the snake,’ added another.

‘This is the most Australian thing ever, even the faded Rivers sign in the background,’ added a third.

‘Another episode of why I’m not going to Australia,’ a fourth wrote.