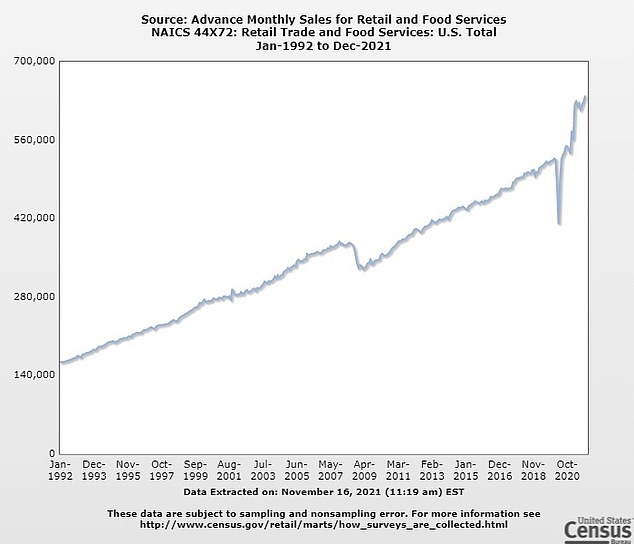 Americans largely shrugged off higher prices last month and stepped up their spending at retail stores and online, providing a boost to the economy.

Retail sales rose 1.7 percent in October from September, a 16.3 percent increase from a year ago, the U.S. Commerce Department said Tuesday.

That’s the biggest monthly gain since March and up from 0.8 percent in the previous month. Much of the sales increase also reflected higher prices.

Tuesday’s retail sales figures aren’t adjusted for inflation, which rose 0.9 percent on the month in October and 6.2 percent from a year ago, the government said last Wednesday.

Retail sales rose 1.7 percent in October from September, a 16.3 percent increase from a year ago, the U.S. Commerce Department said Tuesday

Consumers are seen in a Walmart in Vernon Hills, Illinois earlier this year. Americans largely shrugged off higher prices last month and stepped up their spending at retail stores and online

But not all of the gains in sales can be attributed to higher prices, suggesting that consumer demand remains strong despite soaring inflation.

Americans are also still buying more cars, furniture, and other goods than they did before the pandemic, which is overwhelming U.S. ports and shipping firms and pushing up prices.

The solid spending last month suggests the holiday shopping season is off to a strong start.

The Consumer Price Index rose 6.2 percent in October 2021 from one year prior – the highest it has been since 1990

The Consumer Price Index shows a rise in prices in every category from used cars, laundry equipment, furniture to food

Walmart and Home Depot reported rising sales and solid profits this week, though both companies saw their costs climb because of supply chain disruptions.

Walmart said its consolidated gross profit rate took a hit primarily due to increased supply chain costs, in addition to other issues.

Businesses and other employers are rapidly increasing pay to fill a near-record number of open jobs.

Wages and salaries jumped in the July-September quarter, compared with a year earlier, by the most in 20 years. That’s giving more Americans extra money to spend.

Yet inflation has eroded those gains for most Americans. Prices jumped 6.2 percent in October from a year earlier, the government said, Wednesday the most in 31 years.

Shoppers browse merchandise beside a Christmas tree display at a Target store in King of Prussia, Pennsylvania in a file photo from November 2020

Sales at electronics and appliance stores rose 3.8 percent. Both figures suggest shoppers are already stepping up their holiday shopping. Auto sales rose 1.8 percent as auto manufacturing has perked up.

Sales at restaurants and bars, however, were flat last month, a sign that Americans are still spending more on goods than services, a key reason for all the supply chain snarls.

Investors received another encouraging economic update from the Federal Reserve, which said industrial production rebounded in October with a 1.6 percent gain. The gain followed a 1.3 percent plunge in September.

Wall Street is closely monitoring the latest economic reports for more clues as to how businesses and consumers are dealing with rising inflation.

Companies have been raising prices as they face higher raw materials costs and supply chain problems.

Consumers have been willing to pay the higher prices on many goods, though analysts are concerned that consumers could eventually pull back on spending because of inflation.