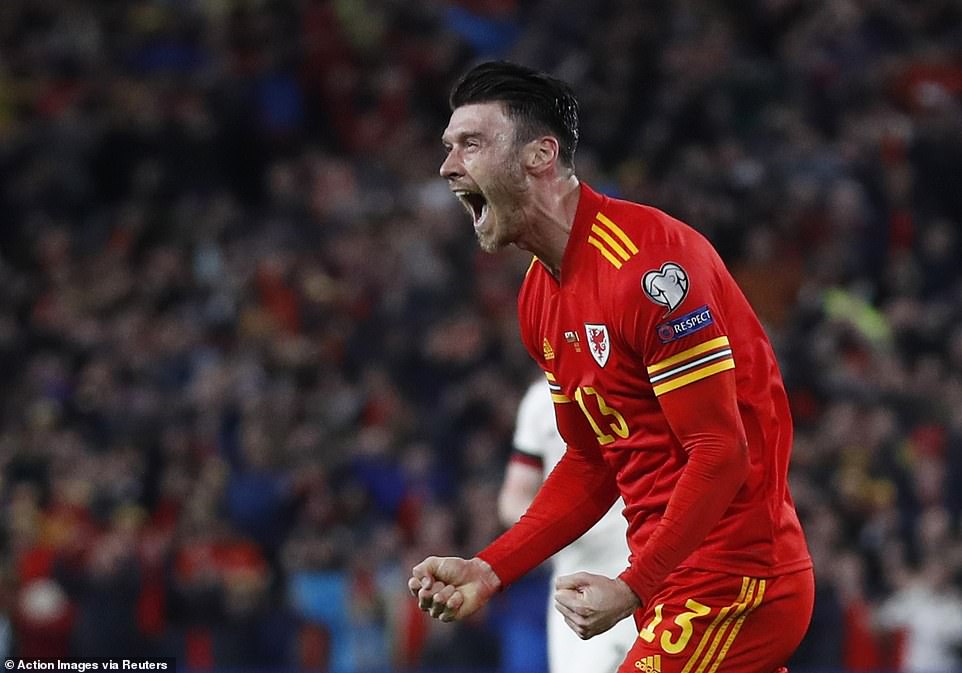 Kieffer Moore boosted Wales’ chances of reaching their first World Cup since 1958 with a priceless goal that ensures at least one home tie in next year’s play-offs.

Moore’s strike also means Rob Page’s team will – at least initially – dodge European champions Italy and Cristiano Ronaldo’s Portugal in the race to reach Qatar 2022. They could meet either of those teams if they win their play-off semi-final, but avoiding them in the first instance is undoubtedly a relief.

There will also be no all-British clash against Scotland at Hampden Park when the draw is made later this month.

Kevin De Bruyne had given Belgium the lead in the 12th minute and had there been no more goals, Wales would have been away from home in the semi-finals. But Moore’s equaliser 20 minutes later guaranteed they will have at least one game in front of this passionate Cardiff crowd.

After winning his 100th cap in the 5-1 win over Belarus on Saturday, Gareth Bale was ruled unfit for this game, while already-qualified Belgium were without Eden Hazard, Thibaut Courtois, Romelu Lukaku and Youri Tielemans.

Divock Origi had already tested Danny Ward from distance by the time De Bruyne gave Belgium the lead in the 12th minute.

Axel Witsel’s volley was blocked but the ball fell perfectly for De Bruyne, who produced a sublime finish from inside the ‘D’ that gave Ward no chance. De Bruyne celebrated provocatively in front of the Wales fans who had been baiting him moments earlier.

The home side were thankful that De Bruyne’s radar was not working quite as well in the 25th minute, when he blasted high and wide from 25 yards.

For all their impressive build-up play, Belgium looked uncertain at the back. Dedryck Boyata’s slip let in Moore and Thomas Meunier had to head the cross behind. Then another error handed Wales’ their equaliser.

Wales had a lucky escape five minutes before the break when De Bruyne lifted a free-kick to Thorgan Hazard on the edge of the penalty area, where the Borussia Dortmund player connected perfectly with a volley, only to see it hit the post. In first-half stoppage time, Moore shot just over from the edge of the box.

Belgium’s second-string defence continued to demonstrate why Toby Alderweireld and Jan Vertonghen remain in the squad despite being well past their best.

Five minutes after the break, another Boyata stumble let in James. He rolled the ball across the area only for the unmarked Connor Roberts to slice comically over the bar.

There were two delays for head injuries in the second half, first when team-mates Aaron Ramsey and Neco Williams collided, and then when Moore and Boyata contested a Belgium corner. All four players were cleared to resume the match.

Williams could have won it for Wales late on when he cut inside and produced a swerving effort that forced a fine save from Koen Casteels.

Nerves were jangling late on when news of a second Czech Republic goal, to put them 2-0 up over Estonia in Prague, filtered into the stadium and in six added minutes Wales knew a Belgium winner would see them fall to third and in doing so lose their home advantage in the play-offs.

In the end it was Moore again who played a key role, winning a free-kick with a foul in the air to run down the clock and ice the game. Job done for Page and his players and now all eyes turn to the play-offs.

Recap with Sportsmail’s NATHAN SALT for how the World Cup qualifier of Wales vs Belgium unfolded, including all the build-up, team news and updates.

Elsewhere, the Czech Republic took on Estonia as they battled for a runner-up spot in Group E, while Group D and G also came to an enticing conclusion. We kept you up-to-date across the board.