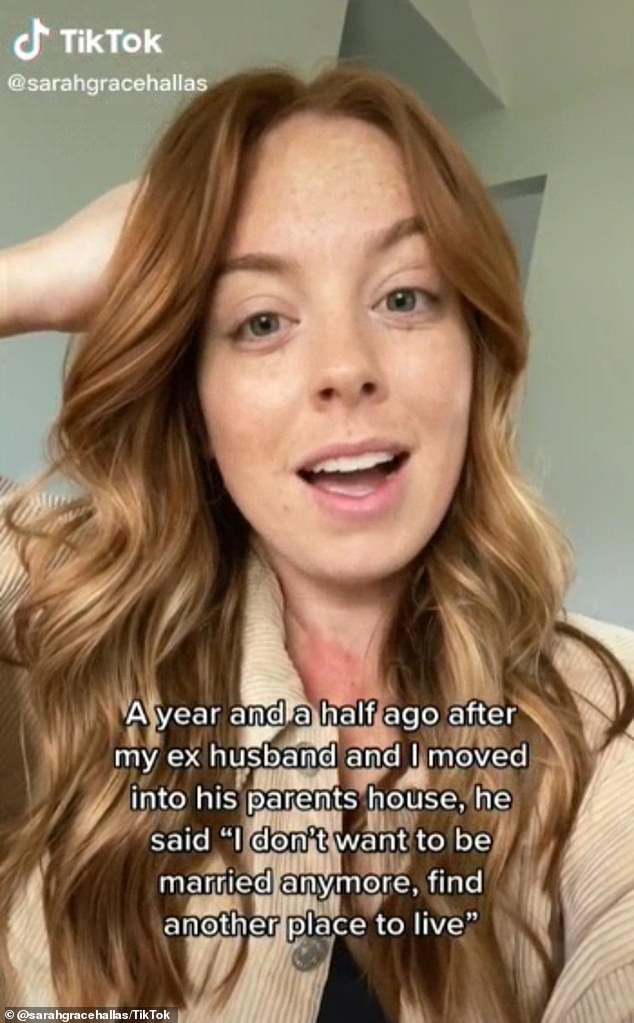 A woman who discovered she was six months pregnant with her ex-husband’s child after he threw her out of his house has revealed how she ended up co-parenting her baby boy with a friend she met on Instagram.

Sarah Hallas, 26, has more than 527,000 followers on TikTok, where she shares heartwarming posts about her life as a single mom and her son Harvey’s incredible bond with his ‘auntie’ Enaka, her former roommate in Nashville, Tennessee.

In one of her viral videos, which has been viewed a whopping 12.7 million times, she detailed how she found out she was pregnant and just months away from giving birth shortly after she moved in with Enaka.

What a story: Sarah Hallas, 26, opened up in a TikTok video about how she ended up co-parenting her son Harvey with her roommate Enaka after moving to Nashville, Tennessee

Shock: Sarah explained that she had just divorced her ex-husband and moved in with Enaka when she learned she was six months pregnant with his baby

Incredible: Sarah admitted she was afraid Enaka would move out and leave her alone, but her friend stayed by her side her entire pregnancy and was even her doula

‘A year and a half ago after my ex-husband and I moved into his parents’ house, he said, “I don’t want to be married anymore. Find another place to live,”‘ she explained in the captions.

‘So I signed the divorce papers and moved to Nashville with a friend I met on Instagram, Enaka — only to find out I was SIX months pregnant with my ex-s child a month later. Overnight I became a single mom with only three months to prepare…’

Sarah admitted she was scared that her friend would move out and leave her alone, but the opposite happened.

‘Enaka never left my side. She became my doula, staying with me for three days during my labor, and [she] even cut Harv’s umbilical cord!’ she recalled.

‘She became more than just a roommate, she became Harv’s other parent. Their bond has been inseparable since birth and I even joke that he thinks Enaka is his mom.

Going viral: The video about her relationship with Enaka has been viewed a whopping 12.7 million times

Too cute: Sarah has more than 527,000 followers on TikTok, where she shares heartwarming posts about her son Harvey’s bond with his ‘auntie’ Enaka

So sweet: The TikToker said Enaka has become ‘Harv’s other parent’ and ‘his favorite person in the world’

Thousands of people took to the comments to share how moved they were by Sarah and Enaka’s friendship.

‘I aspire to be like Enaka. Made me cry,’ one person wrote, while another added: ‘She’s an Angel who came to save you.’

‘Enaka is your soulmate, no doubt,’ someone else shared.

People also had plenty of questions for Sarah, with many wanting to know how she didn’t realize she was pregnant until she was six months along.

In a follow-up video, she explained that her periods have always been irregular and her body didn’t really change. She shared a photo of herself six months pregnant, revealing her stomach was relatively flat.

‘This is me the day after I took a pregnancy test and the next day I went to an ultrasound and found out I was six months along,’ she said. ‘I never had a regular [menstrual] cycle. Like honestly it was normal for me to only have maybe two or three cycles a year, so this was completely normal for me.

Say what? In a follow-up video, Sarah shared a video of her stomach when she was six months pregnant, saying she barely gained any weight and has always had irregular periods

Arrangement: Sarah also opened up about her relationship with her ex-husband post-baby, saying he isn’t a part of their child’s life, but he does pay for some basic necessities

‘Plus, I was going through a divorce, so I thought it was normal to just gain a little bit of weight in my belly. I didn’t think anything of it.’

Sarah noted that she ‘felt great’ at the time and didn’t experience any morning sickness. She didn’t suspect she was pregnant until felt her son inside her.

‘The only reason I took a pregnancy test is because I felt him literally moving in my belly and I was getting cramps, which I thought was weird,’ she said.

‘I called my ex-husband right away and let him know I was pregnant and it was definitely his and invited him to the ultrasound.’

In another video, Sarah opened up about her relationship with her ex-husband post-baby, saying he isn’t a part of their child’s life.

Moving on: Sarah no longer lives with Enaka, who recently bought her own home, and she has moved as well

Best friends: Even though they aren’t living together anything, Sarah and Enaka are still as close as can be

‘Harv’s dad and I do not have a co-parenting relationship, which is not my choice at all. The door is wide open for him to see his son. If he decides he wants to, I would be more than happy to let him,’ she said.

‘I’ve gotten a lot of questions about child support, too, and he does contribute every month to some basic necessities like diapers and formula and stuff like that,’ she added, noting that the majority of Harv’s expenses fall on her.

There have been a number of changes in Sarah’s life since her video about Harvey’s relationship with Enaka went viral. The former roommates went their separate ways after their apartment lease was up.

Sarah had planned on moving out of state for a job that fell through, while Enaka bought her own home.

Even though they aren’t living together anything, Sarah and her son are still incredibly close with Enaka, who is featured in the mom’s latest TikTok videos.