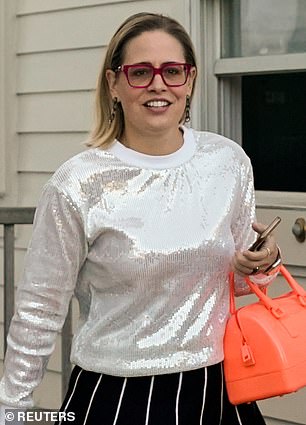 Sen. Kyrsten Sinema insisted in a rare interview that came out Wednesday that she would not leave the Democratic Party, though bashed progressive activists for ‘unfairly and illegally’ following her into the bathroom to protest her stance on Biden’s Build Back Better bill.

Sinema also complained about the coverage her sometimes outlandish outfit choices receive. ‘It’s very inappropriate,’ the 45-year-old freshman senator said. ‘I wear what I want because I like it,’ she said.

In a new interview with Politico, Sen. Kyrsten Sinema complained about the coverage of her sometimes outlandish outfit choices: ‘I wear what I want because I like it,’ the 45-year-old Arizona Democrat said

During the pandemic, Sen. Kyrsten Sinema wore colorful wigs, standing in solidarity with people who were practicing social distancing and thus not going into the salon to get their roots colored

‘It’s not a news story, and it’s no one’s business,’ she continued. ‘It’s not helpful to heave [coverage] be positive or negative. It also implies that somehow women are dressing for someone else.’

During her time in the Senate, Sinema has sported colorful wigs – in a show of solidarity for those practicing social distancing, and thus not getting their roots done at the hair salon.

She also sported a ‘F**k Off’ ring in April.

Sinema sported the band after voting against raising the federal minimum wage to $15, a move that received criticism from the left flank of her party.

On issues like bumping up the minimum wage – as well as passing the Build Back Better bill with its original $3.5 trillion pricetag, election reform and changing the filibuster – Sinema suggests to Politico that she believes her party overpromised voters.

‘You’re either honest or you’re not honest,’ she said. ‘So just tell the truth and be honest and deliver that which you can deliver.’

‘There’s this growing trend of people in both political parties who promise things that cannot be delivered, in order to get the short-term political agenda,’ she continued. ‘And I believe that it damages the long term health of our democracy.’

Sinema was followed into a bathroom at Arizona State University, where she teaches, by Living United for Change in Arizona activists, who questioned her resistance to Biden’s Build Back Better bill – as well as her stance on immigration.

Democrats had originally wanted to tuck an immigration provision into the bill, which will be passed through the Senate using reconciliation, but plans have so far been thwarted by the Senate parliamentarian.

Sen. Kyrsten Sinema told Politico she would not be changing parties, though she also complimented Republican Leader Mitch McConnell’s wit: ‘He has a dry sense of humor, it’s underrated’

Sen. Kyrsten Sinema also complained about progressive activists who followed her into the bathroom to protest, saying the move was unfair and illegal

During the interview, Sinema stayed coy about a number of things – including whether she would ultimately support the Build Back Better bill.

‘If you’re in the middle of negotiating things that are delicate or difficult … doing it in good faith directly with each other is the best way to get to an outcome,’ she said. ‘I’m still in the process of negotiating the second provision of the president’s agenda … and I don’t negotiate in the press.’

She did offer that she ‘will not support tax policies that have a negative impact on our economic climate.’

Sinema didn’t want to see taxes raised on corporations and some wealthy Americans to pay for Biden’s Build Back Better social spending bill.

She added that the bill’s climate change provisions are the ‘most important part of what is under discussion.’

Again playing coy, Sinema also refused to say whether she would run for re-election.

And she wouldn’t comment on Rep. Ruben Gallego, another Arizona Democrat, suggesting he could primary challenge her.